Mother Nature loves to show her fickle side in spring. Forecasters have a 50/50 chance of being in sync with her moods. When they predict 30% chance of precipitation, I say 70% chance of no precipitation. But, then again, do I want to be wet? or cold? or snowed upon? On this particular weekend, forecasters said 30% chance on Friday, 50% on Saturday. I decided to roll the dice and selected Deadfall Lakes as my destination.

It’s extremely unusual to be able to access this area in the spring. The pass doesn’t usually open until late June or early July. 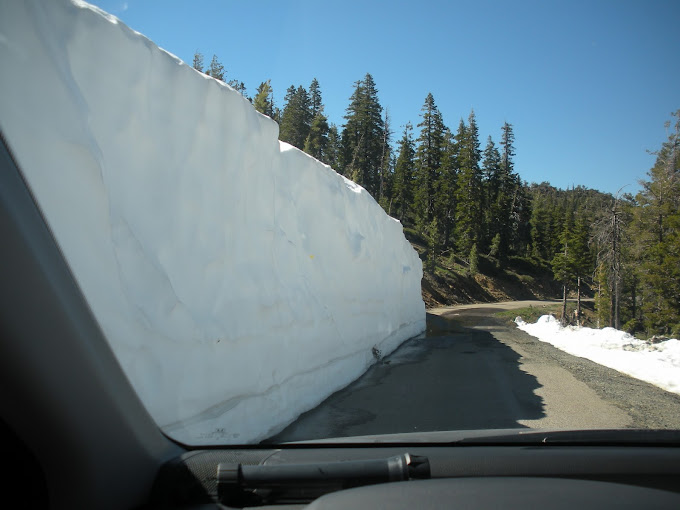 There are two primary access points to reach the Deadfall Lakes basin. First, via the PCT (Pacific Crest Trail), heading south from Parks Creek Pass or north from the Gumboot trailhead. Or, second, from the Deadfall Meadows trail, the one I selected for this adventure. 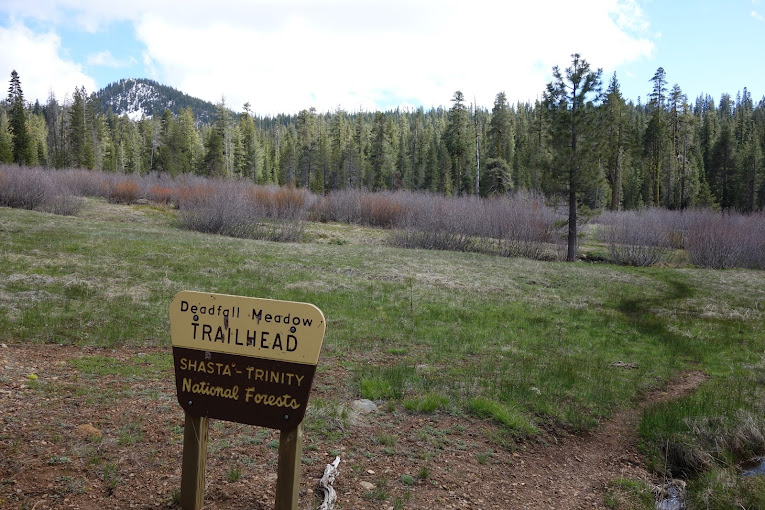 In the early season, this trail should be avoided. It’s a catchment for snow melt and creek overflow, and as a LNT (Leave No Trace) promoter, traveling off trail or widening paths in sensitive areas is inappropriate. Later in the season, this meadow has the most beautiful wildflowers and water plants including the magical carnivorous pitcher plant.

As with any wilderness area, the WILD in WILDerness should be expected. Meadows, thickets and nearby creeks are perfect habitat for bears. On this day, just beyond the trail sign, in front of those thickets, was the blackest, shiniest-coated bear I’ve ever had the privilege of seeing. 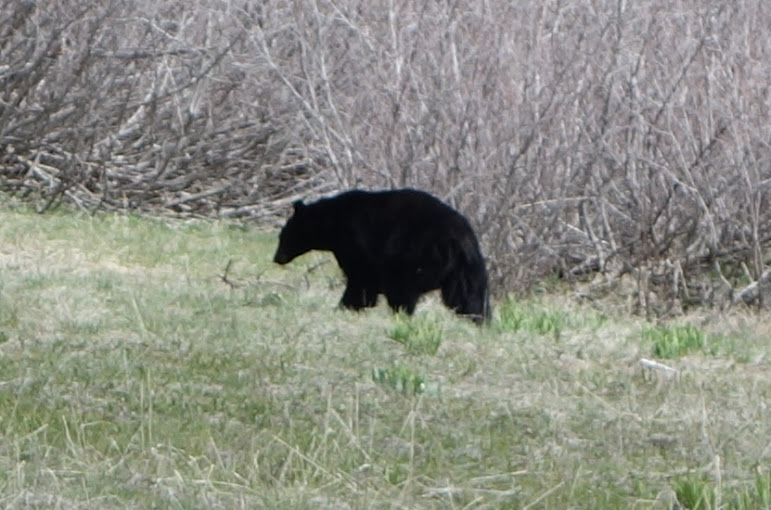 Along the way I was treated to creek crossings and a couple of early blooms. Opportunities exist to replenish your water and to get your feet wet. 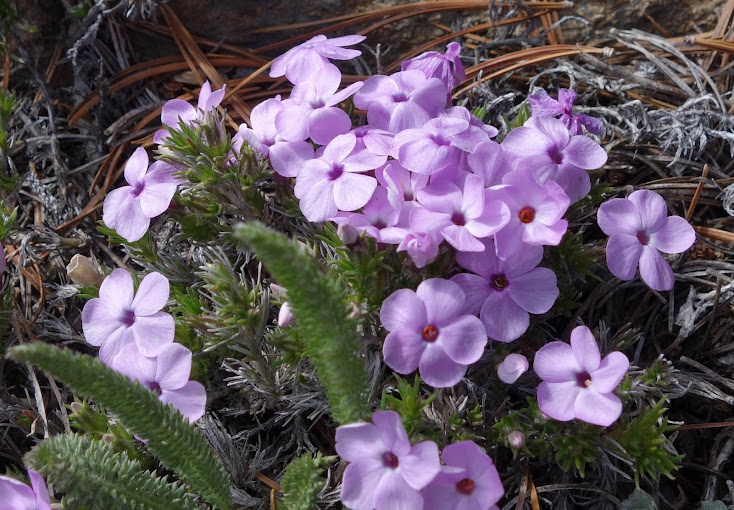 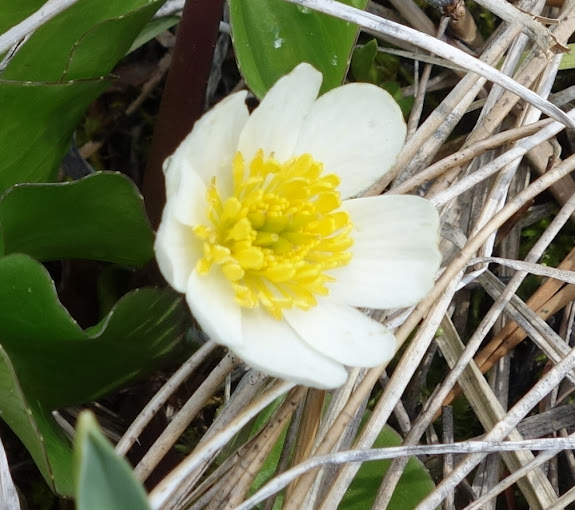 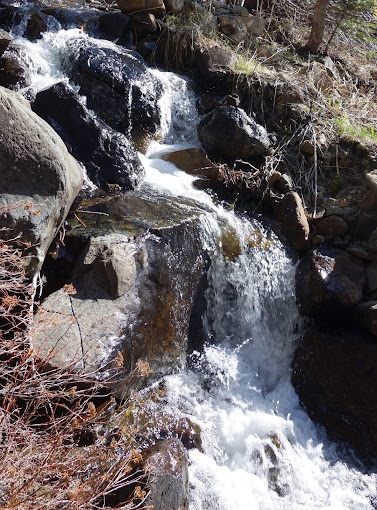 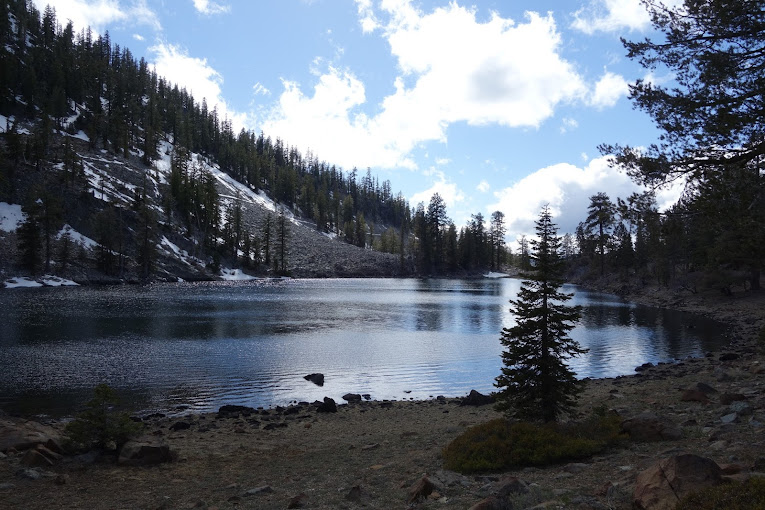 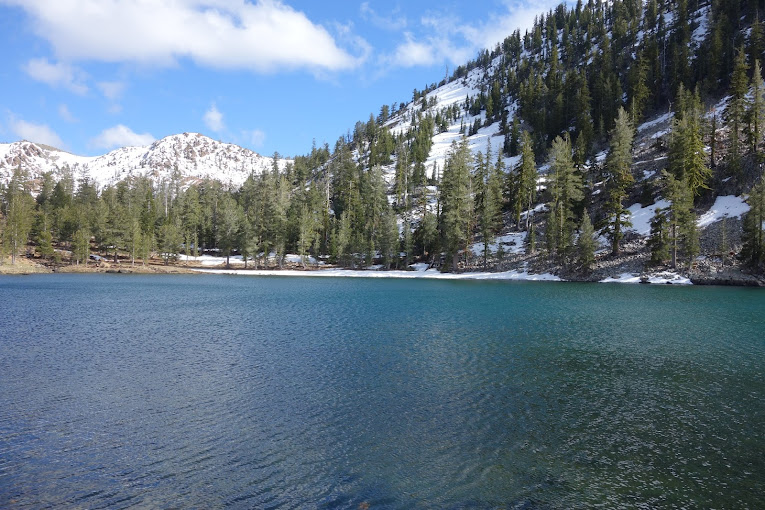 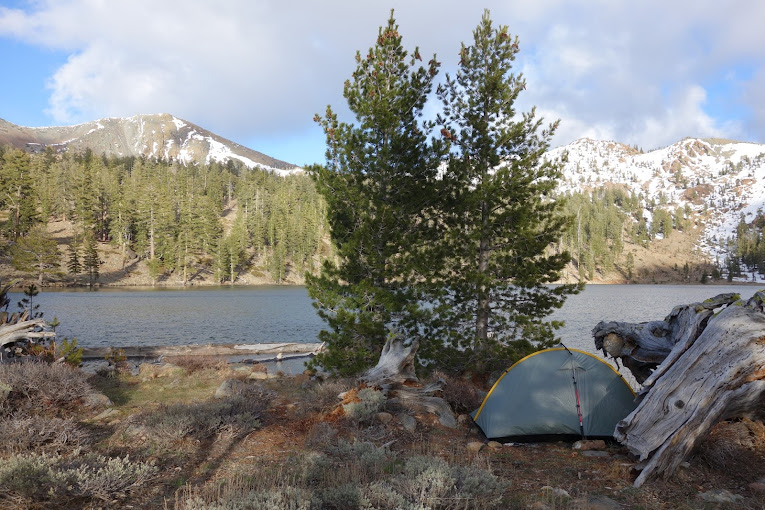 Tucked in out of the wind, watching the building and receding storm clouds at Middle Deadfall Lake 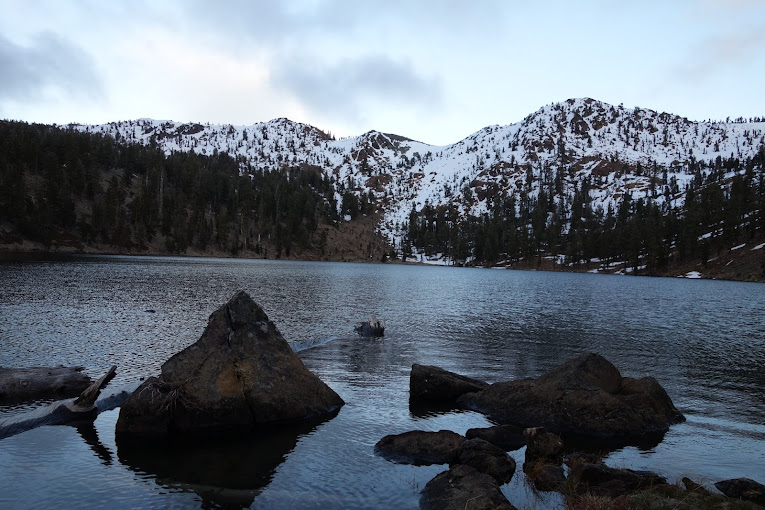 By 8pm, the wind had died down and the skies were clearing. 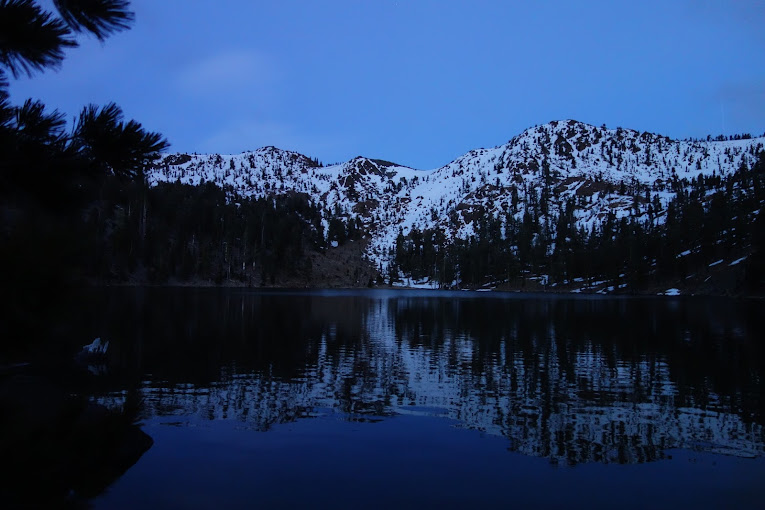 9pm is hiker’s midnight, all is calm. The question remains, did I hedge my precipitation probability bet correctly? 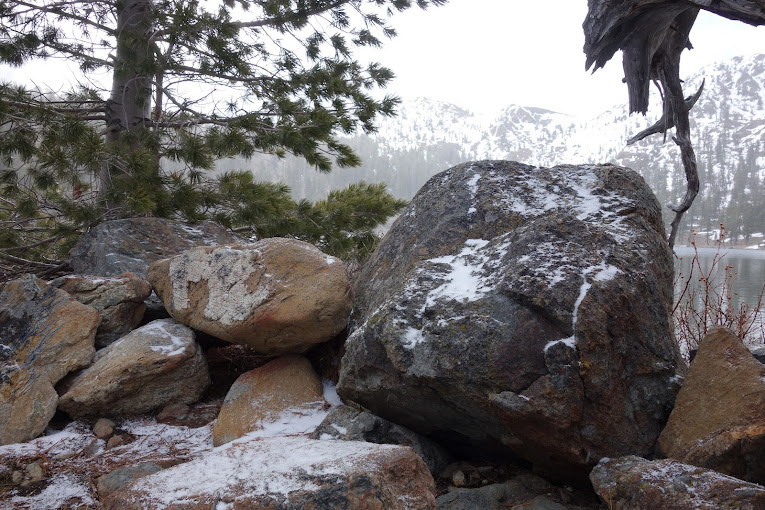 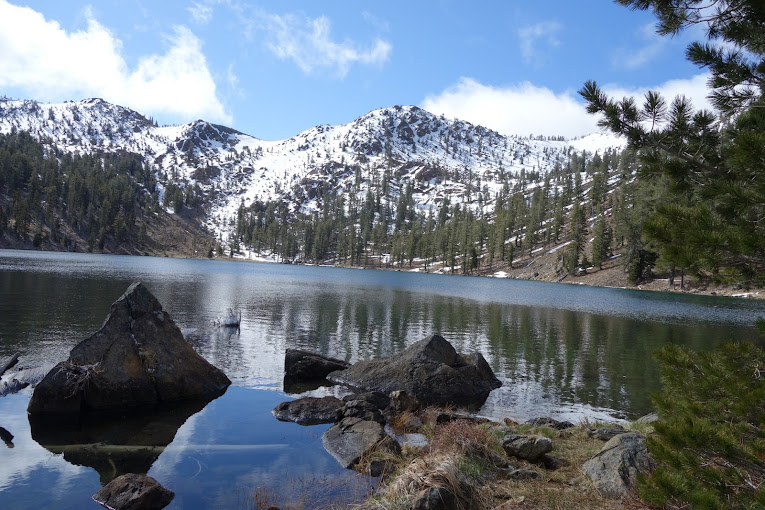 By 9:30, things were looking pretty good and it looked like Mother Nature was being kind to me. 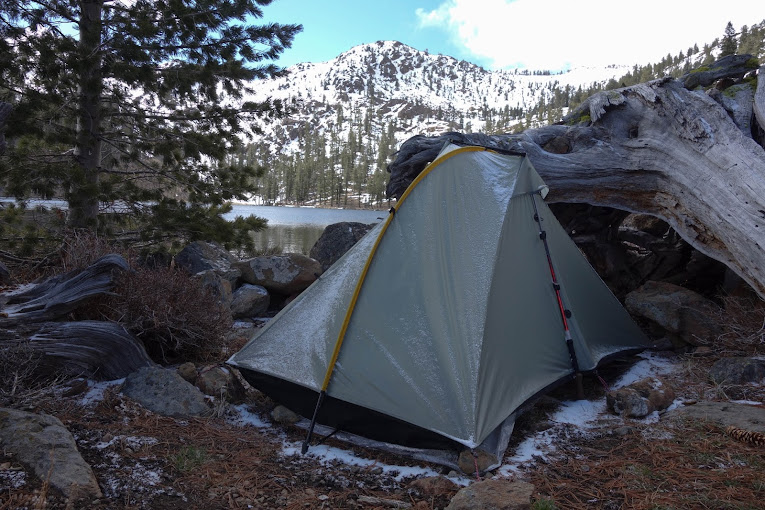 Evidence of the tiny bit of snow. The weather continued to be fickle with storms clouds, wind, and snow showers coming and going making the decision of the day’s plan more challenging. 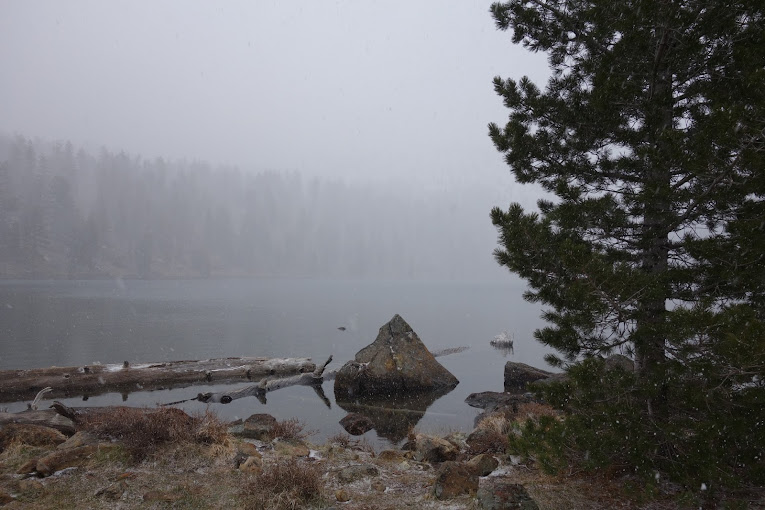 By 11:30, Mother Nature released her fury. With the skies socked in, there was no reason to hike for views, and no sense spending hours secluded in my tent (since I’d already lollygagged away the morning), thus it was time to high-tail it off the mountain. 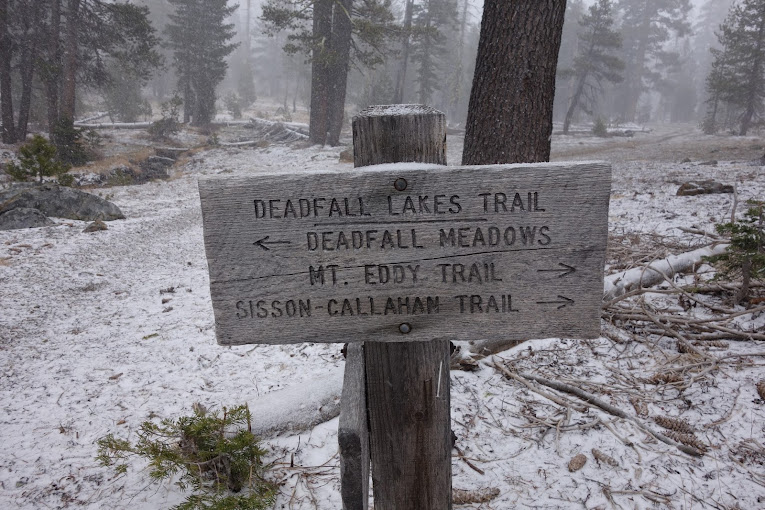 It snowed and sleeted all the way down the trail, reminding me of how quickly the trail can become masked by snow-covered topography. 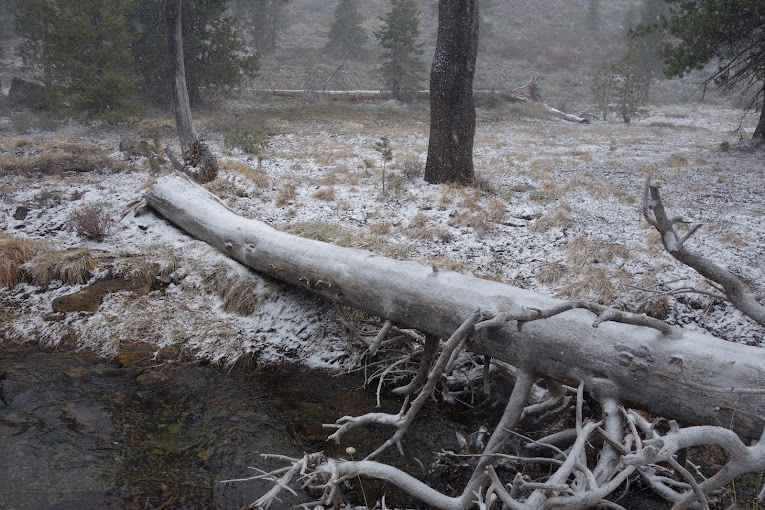 What was a dry easy log crossing becomes a dangerous obstacle when covered with snow and ice. 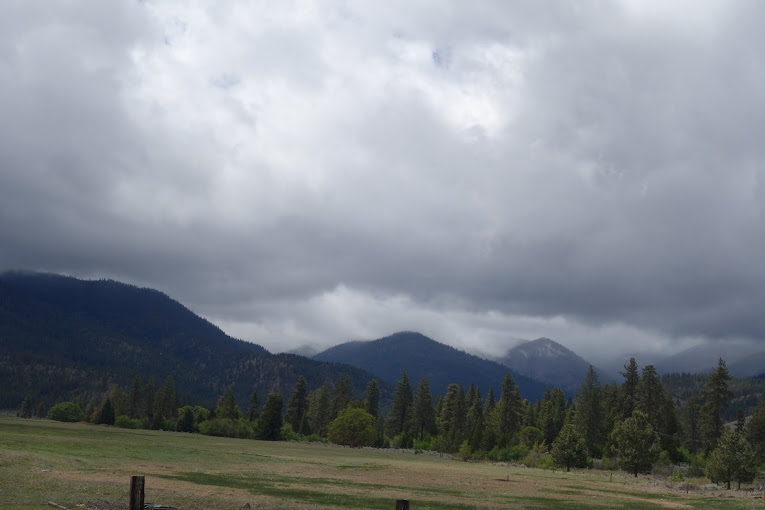 Looking back up at the mountains whence I’d come reaffirmed my decision to hike out vs hunkering down and waiting out the storm.

Memories are made from taking chances and expecting the unexpected, while making wise decisions about weather and conditions. Planning and preparation are keys to success. On this trip, I brought gear for inclement weather, notified others of my whereabouts and plans, had maps, compass, and electronics to assist in my travels if need be.

8 thoughts on “PCT Section P – Deadfall Lakes – Weather or not?”