There are three mountain ranges in Southern Utah. They are all incredibly dominant landmarks as they stand tall in contrast to the desert floor. I’d visited the Abajo and LaSal mountains, but hadn’t made it to the Henry’s yet. While adventuring in Capitol Reef National Park, once again the Henry Mountains were front and center, almost saying, please come visit me. Each time we saw them, we’d exclaimed “Oh Henry!” 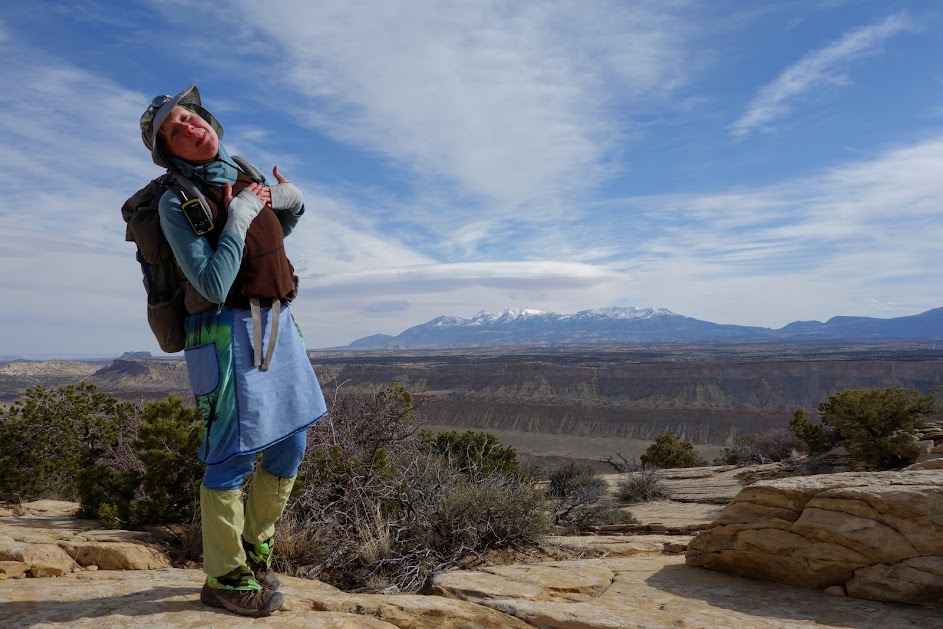 One night we even found a place to disperse camp near Capitol Reef where Joan could sleep with Henry. According to the NPS, “The Henry Mountains soar about 7,000 feet over the surrounding terrain (along Capitol Reef’s Waterfold Pocket) to a height of 11,522 feet. The Henrys formed when magma intruded overlying sedimentary rocks, pushed them upwards, then cooled into granitic rock. Subsequent erosion stripped off the softer sediments and revealed the peaks’ hard, granitic core.” 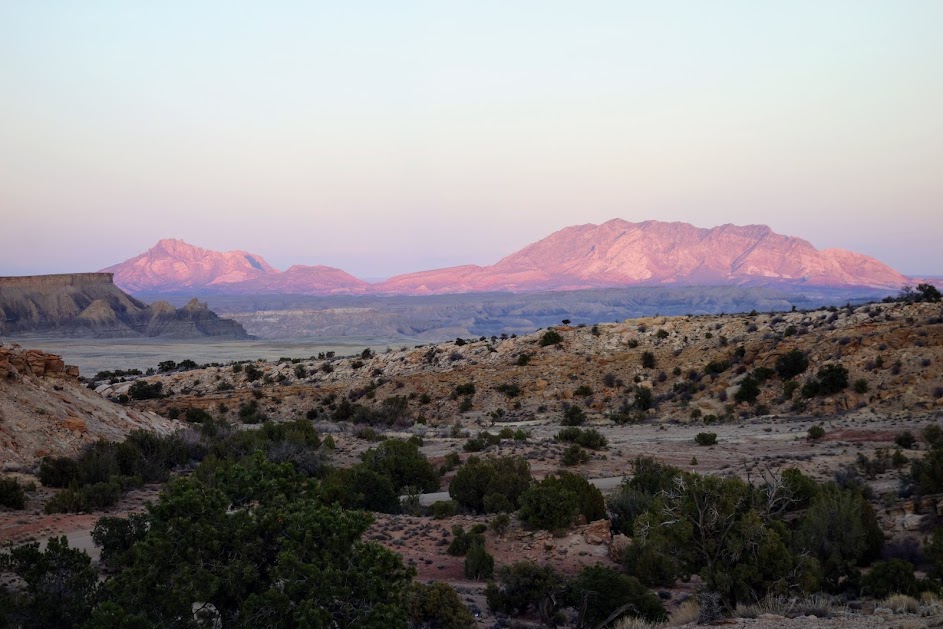 Temptation to see if a visit was possible became a no brainer as we passed through Hanksville. We stopped at the ranger station and the ranger said, you should be able to access at least the flanks. For us, that would be good enough. My car found the roads suitable, so up, up we went until we found a dispersed campsite with views of some of Henry’s higher peaks as well as down into Canyonlands and across to the LaSals and Abajos. We were greeted with the full moon rising. Could we ask for more? Joan has dreamed of this moment for a very long time. I was thrilled to make this dream come true. 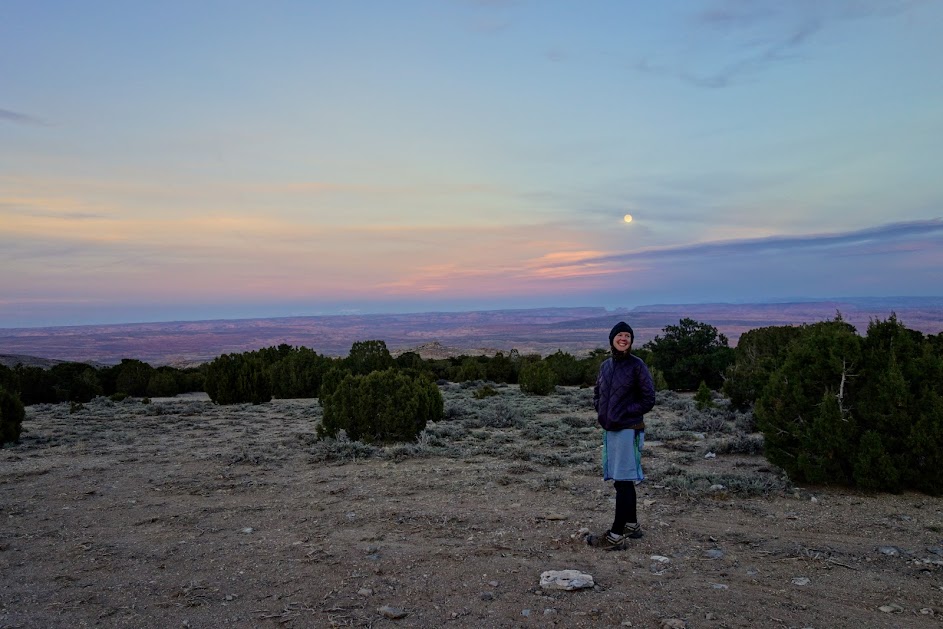 Did I mention we were also gifted a magical sunset? 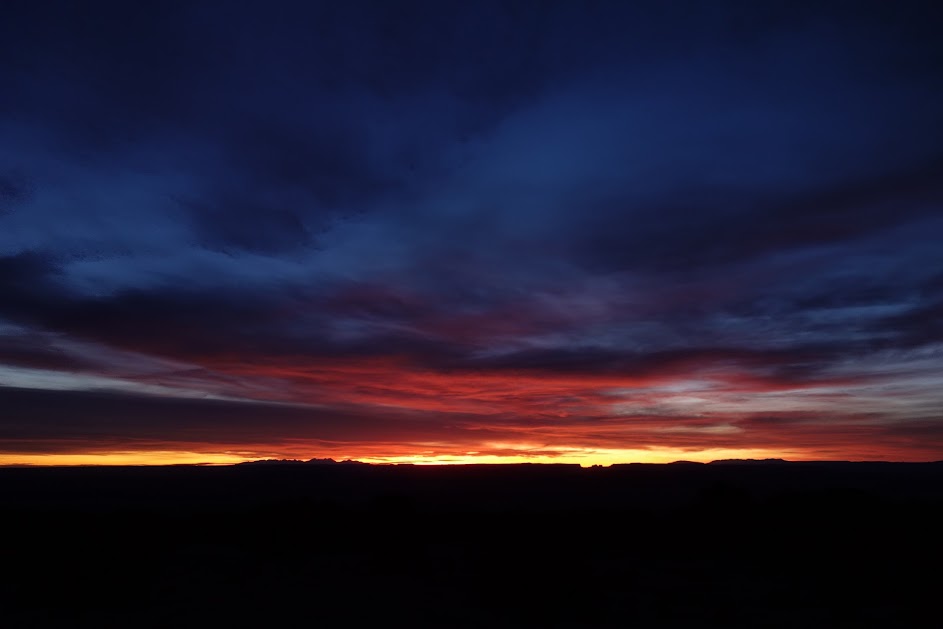 According to NPS Capitol Reef literature, “The Henry Mountains were the last mountain range in the contiguous United States to be officially recorded and named. Explorer John Wesley Powell first documented them in 1869. There were eventually named in honor of physicist Joseph Henry, the first secretary of the Smithsonian Institution. Today, the Henrys continue to be remote islands of rugged, forested roads that are the only way to access them. These isolated peaks are also home to one of only four remaining free-roaming, genetically-purebred herds of American bison.” 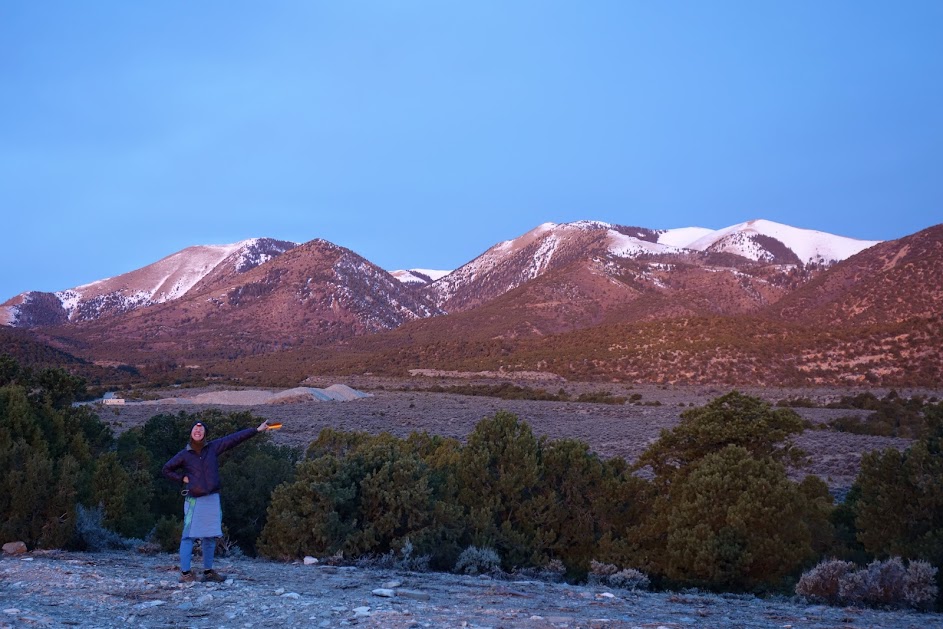 After driving to a spot where my car said enough, we began road walking. It was a beautiful day with amazing views of Mt Ellen to the right. We thought, maybe just maybe we’ll climb upon her flanks. 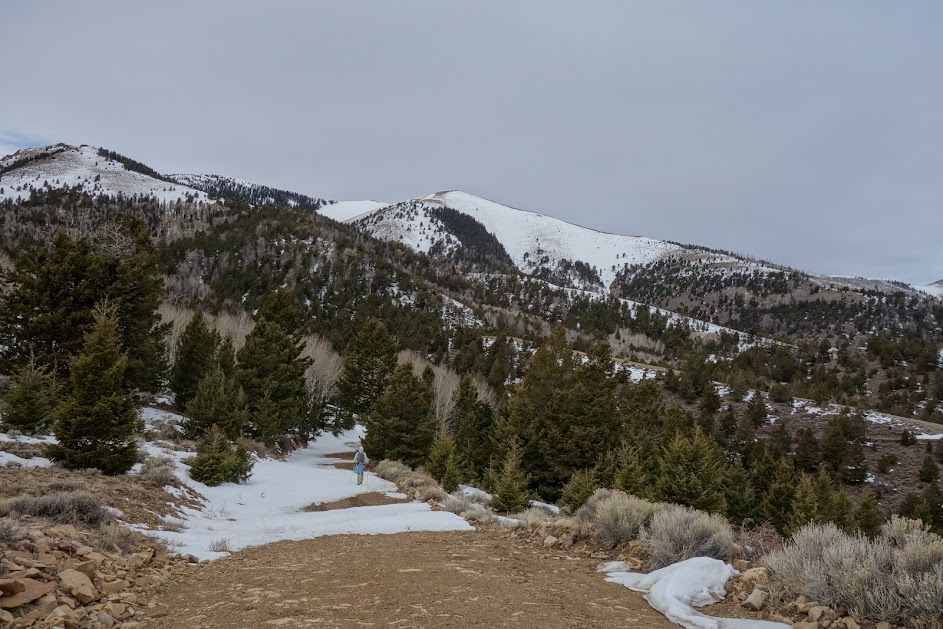 Well, we didn’t quite make Mt Ellen, instead finding the peak to the left more to our liking. How happy was Joan? 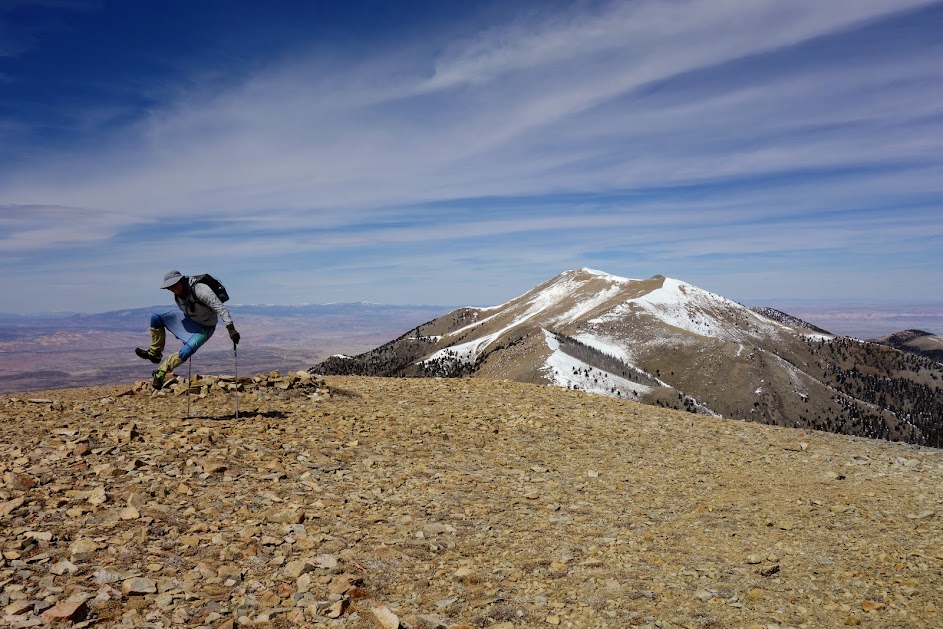 There might have been a bit of postholing. Did we care? Heck no! 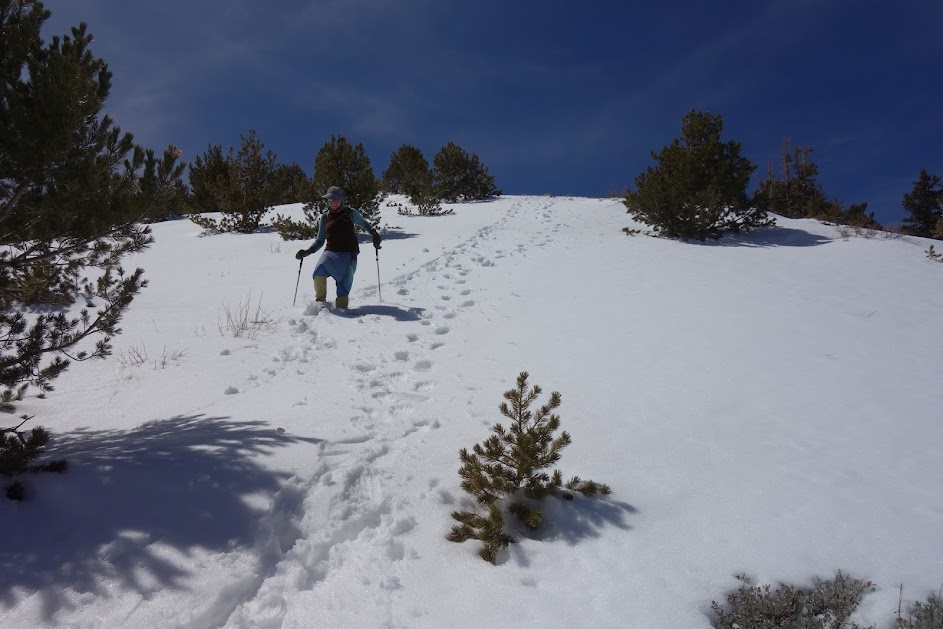 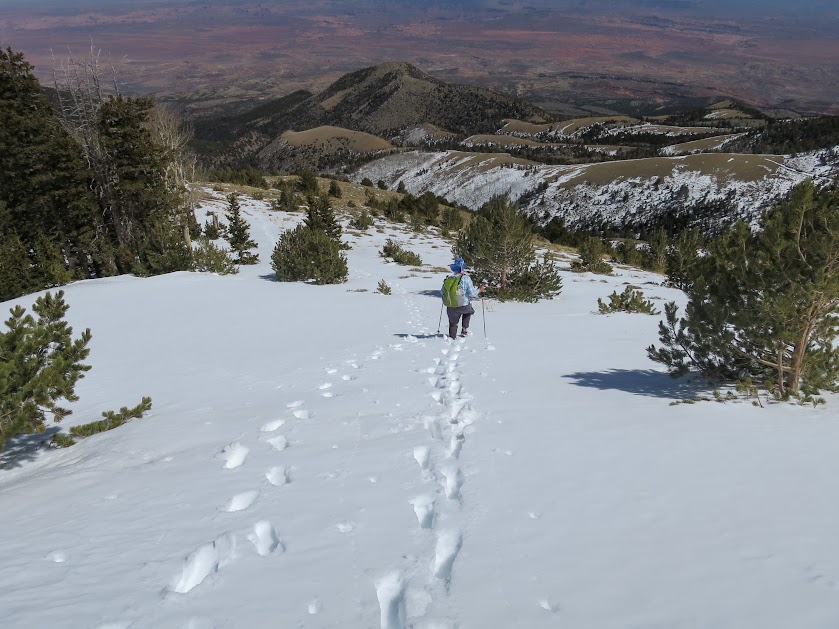 Following ATV tracks seems to always mean steep, much steeper than it looks. Did Jan care? Nope, not on this day. She was pretty dang happy with the views. 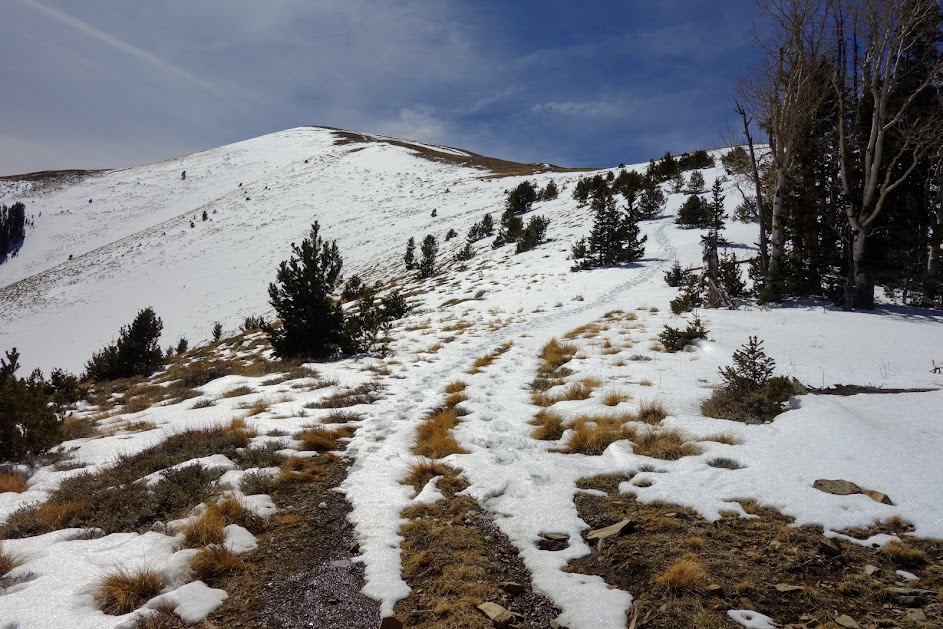 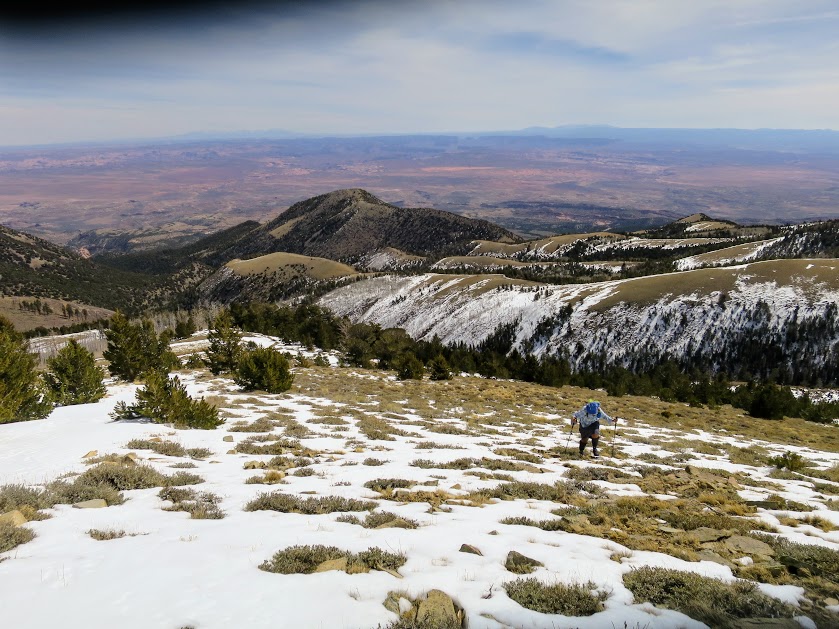 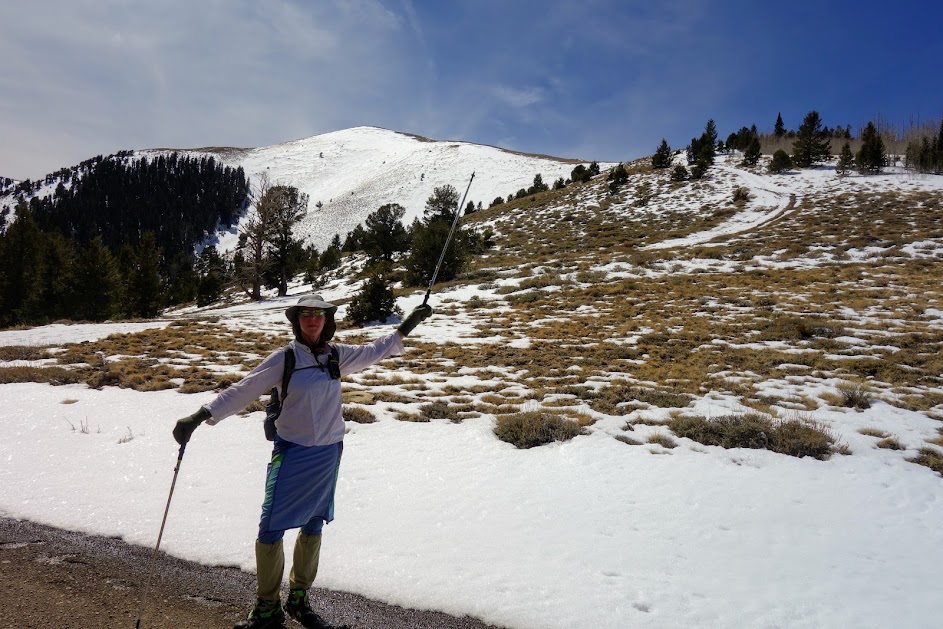 Road walking can be fantastic! We even met a couple hiking the Hayduke Trail (route). 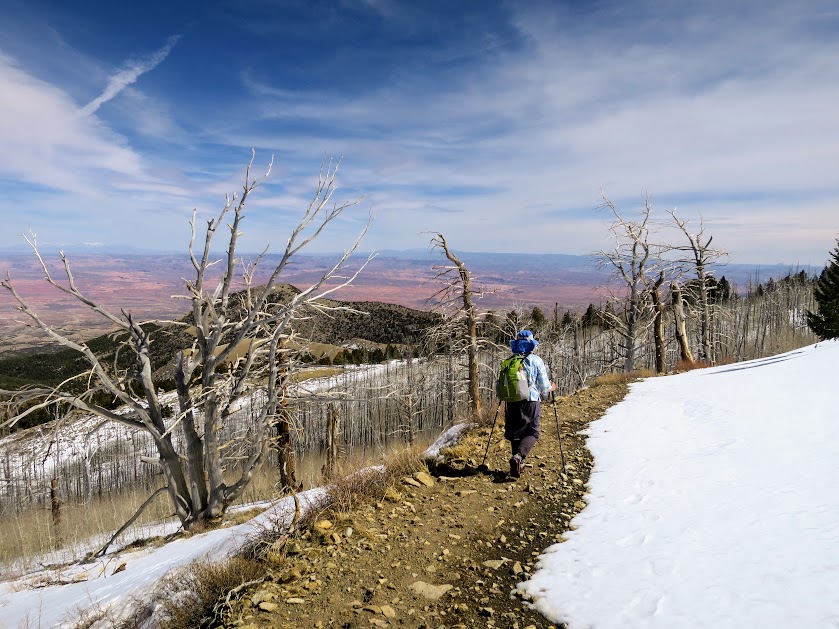 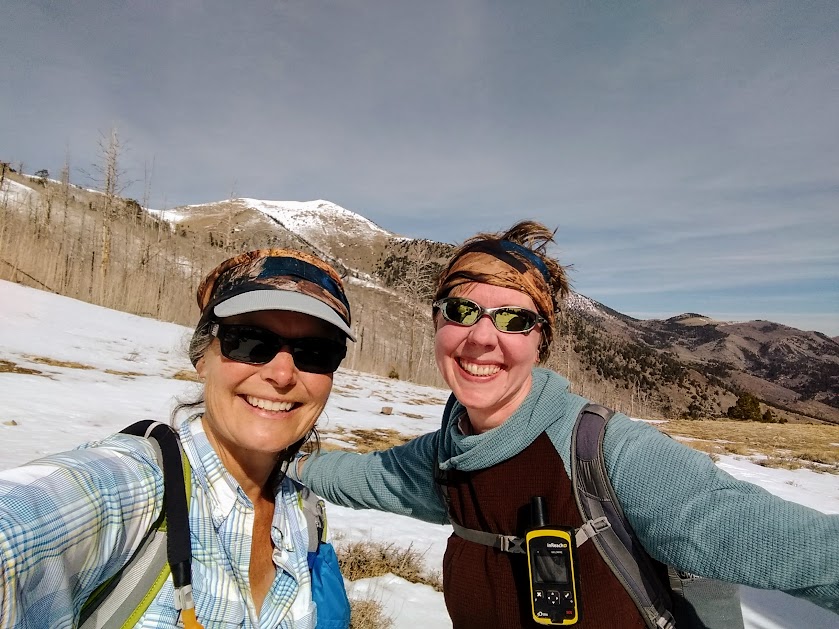 This photo is a good perspective of this section of the range. 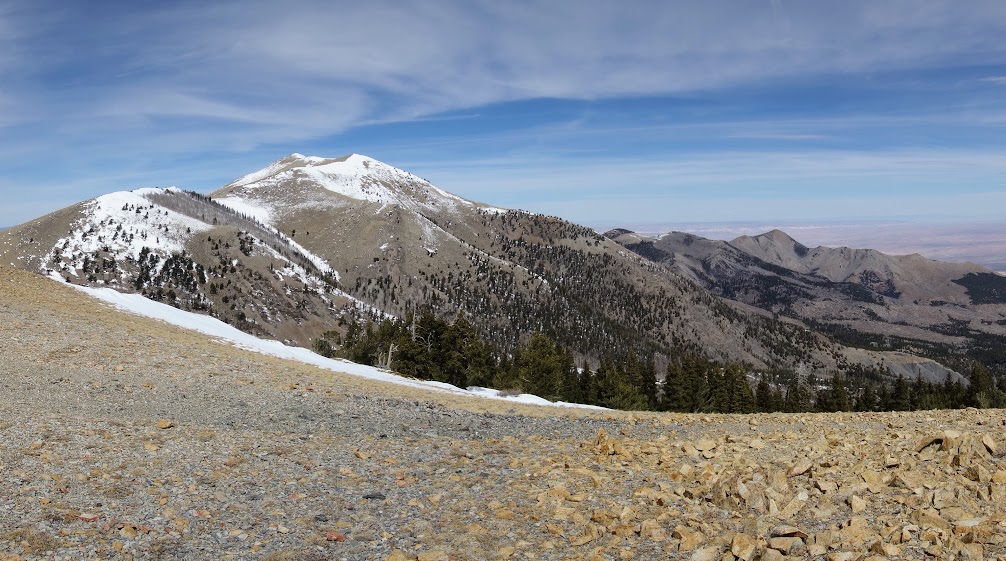 Our campsite with an amazing view of the moon setting between Mt Ellen on the right and the unnamed peak we’d bagged the previous day on the left. 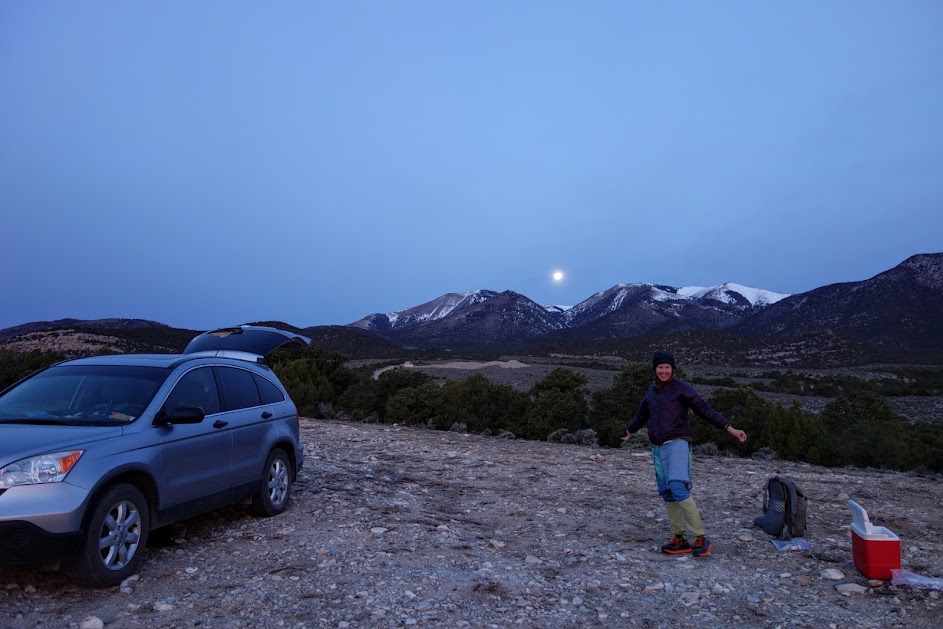 The next day we walked a different road and found a few more peaks to summit. 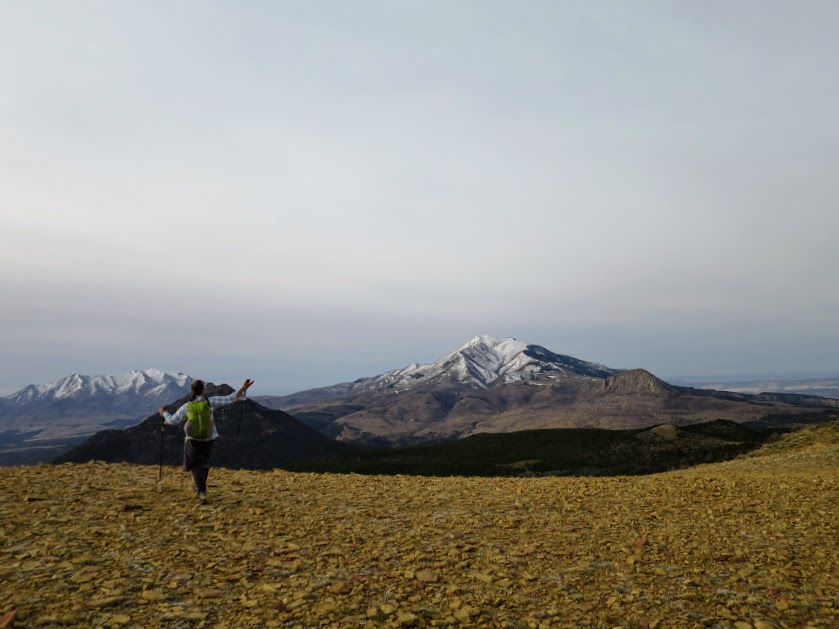 This particular peak was spectacular because we could see down into Capitol Reef at the Waterfold Pocket and beyond, where we’d spent the previous week hiking and exploring. 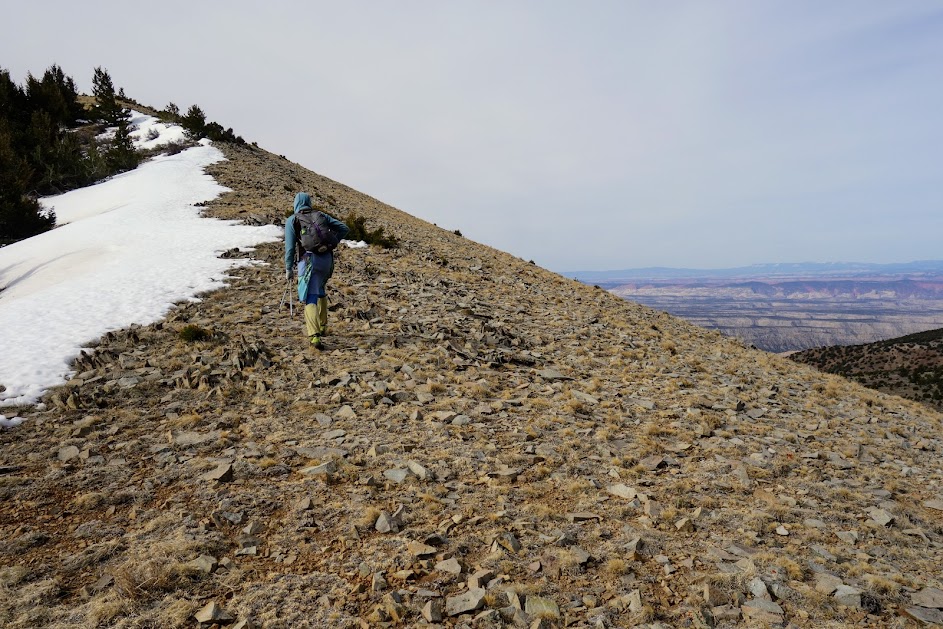 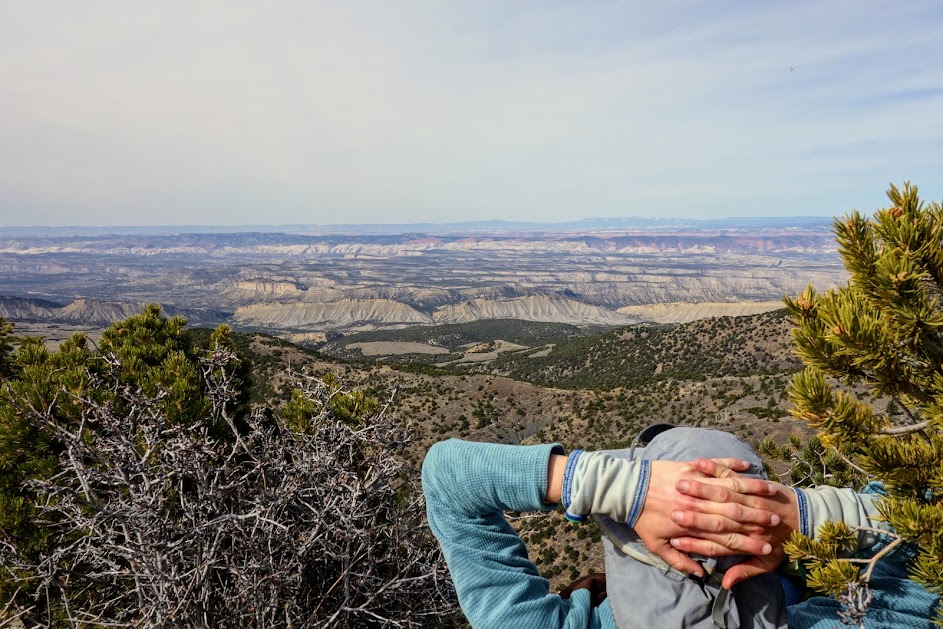 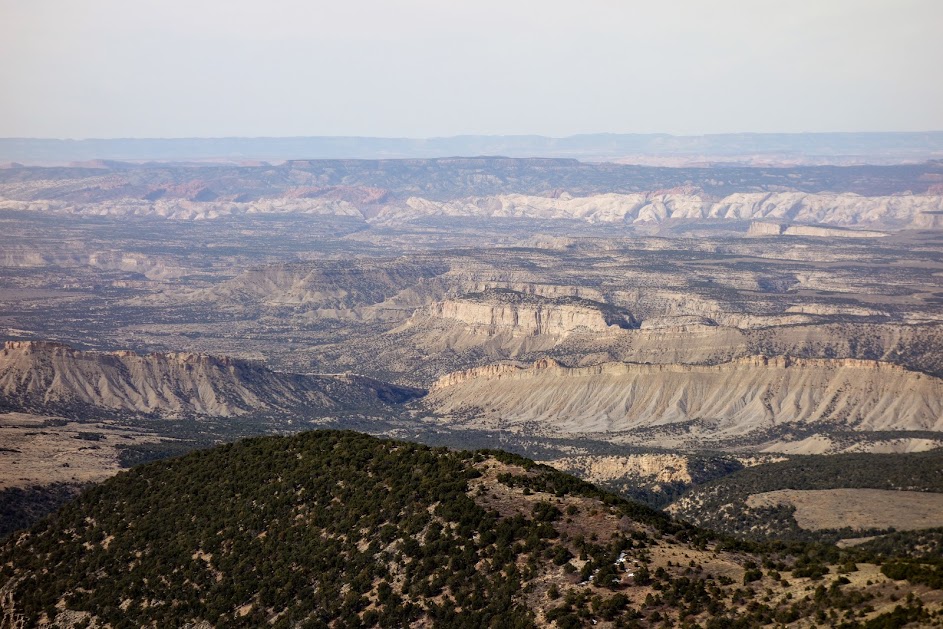 Would we be successful in bagging our last peak of the day? We best take a break and fuel up first. 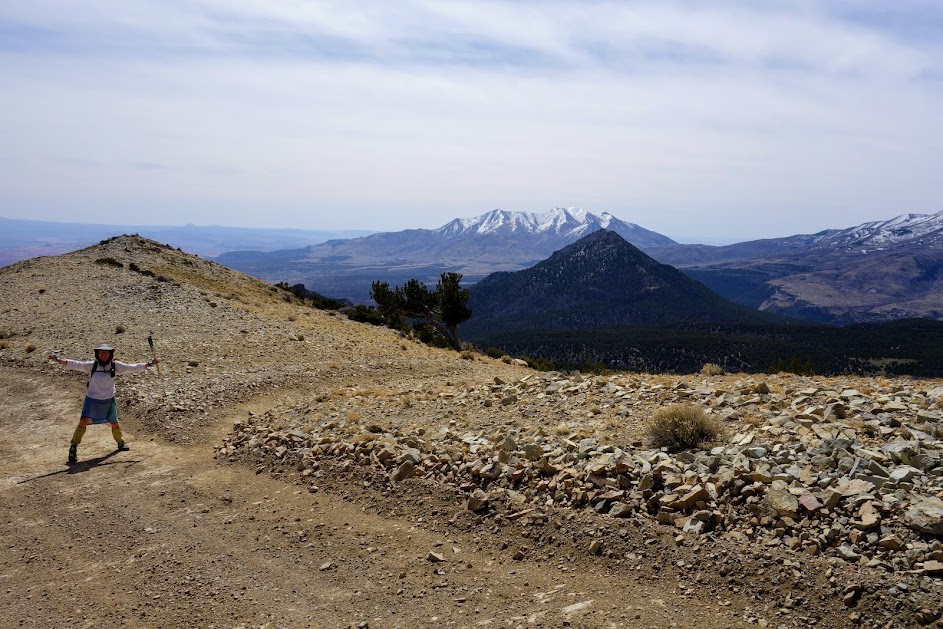 I think she might have started celebrating a little too soon. 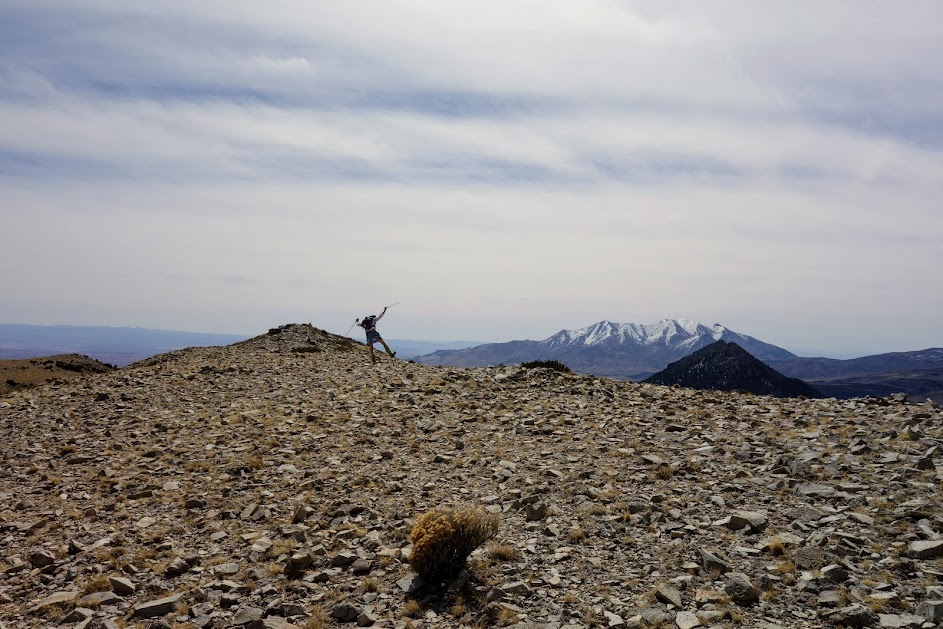 Finding this shelter at the summit was a surprise. 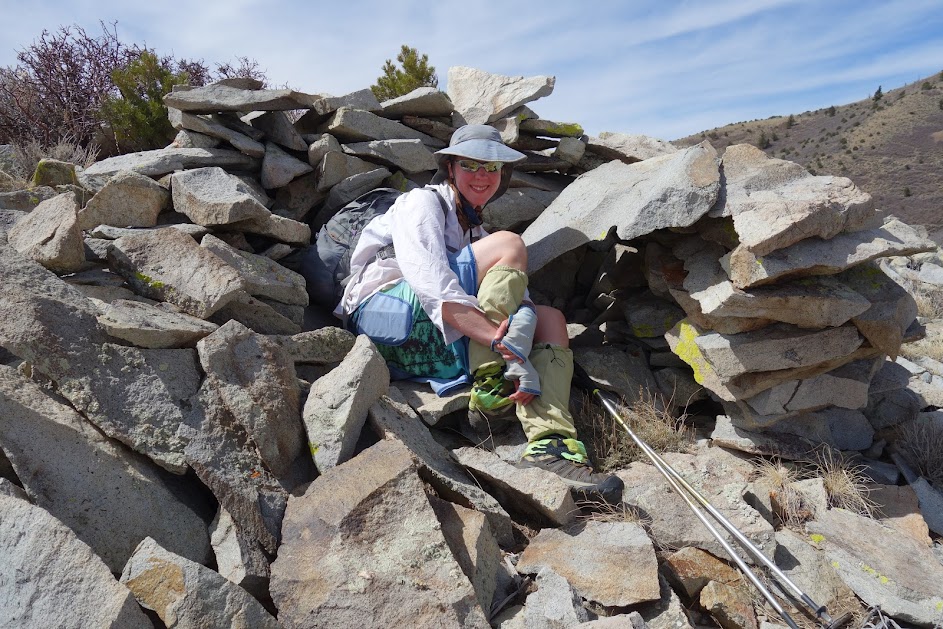 Seeing my car upon returning from a jaunt is such a relief. Thanks for waiting for me CR-V! 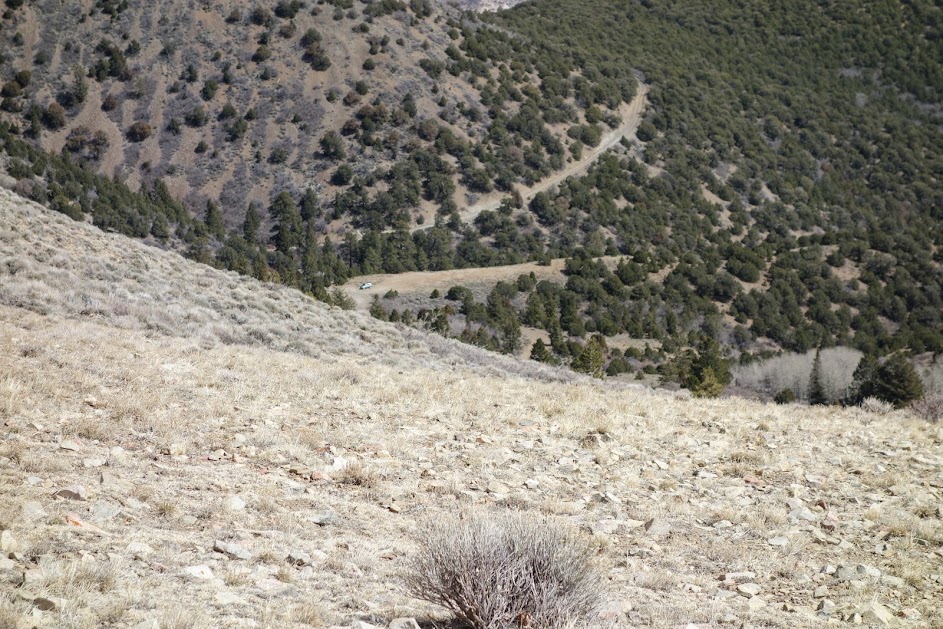 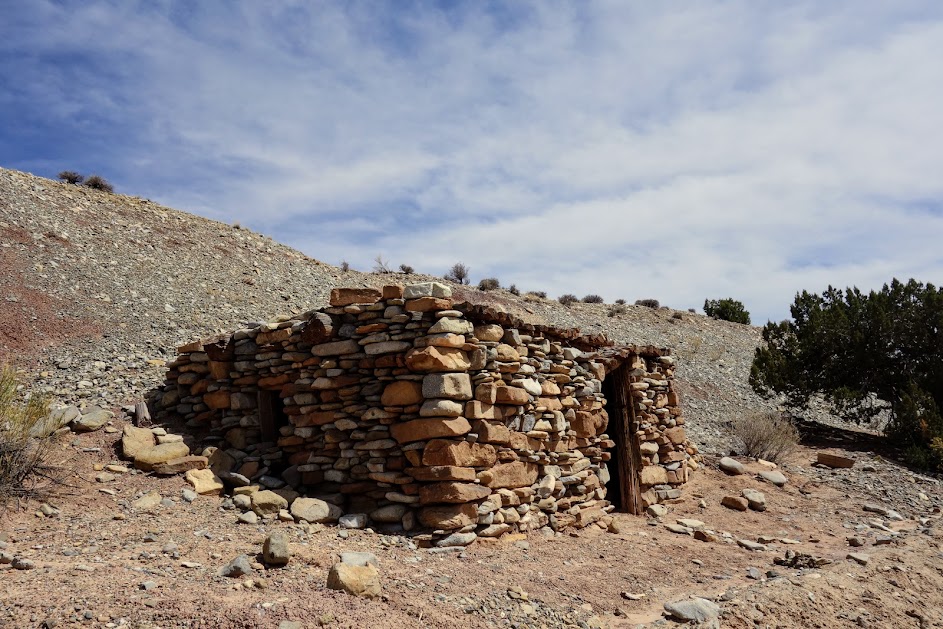 What happens when you make a dream come true? I’d call this pure bliss. 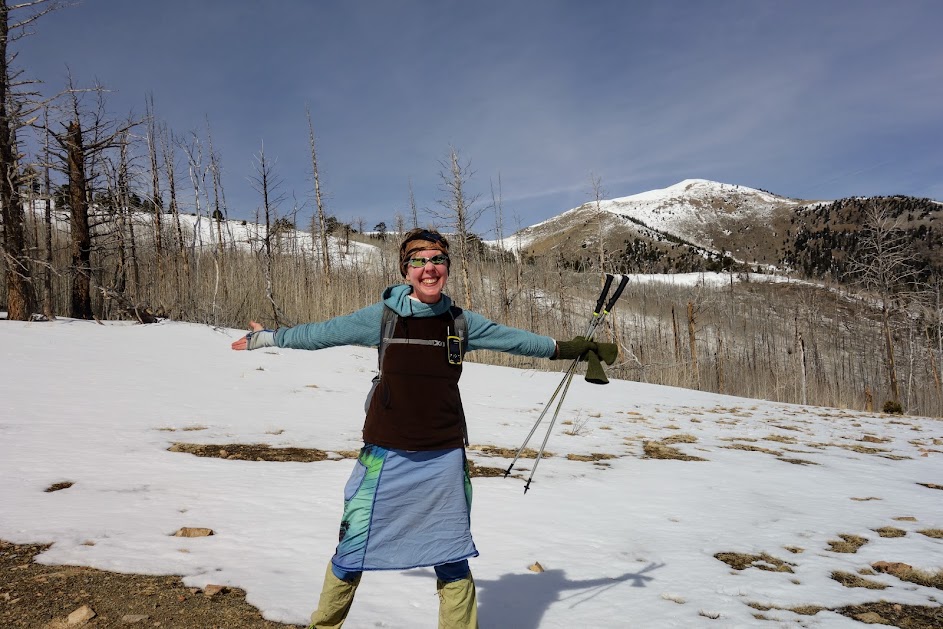 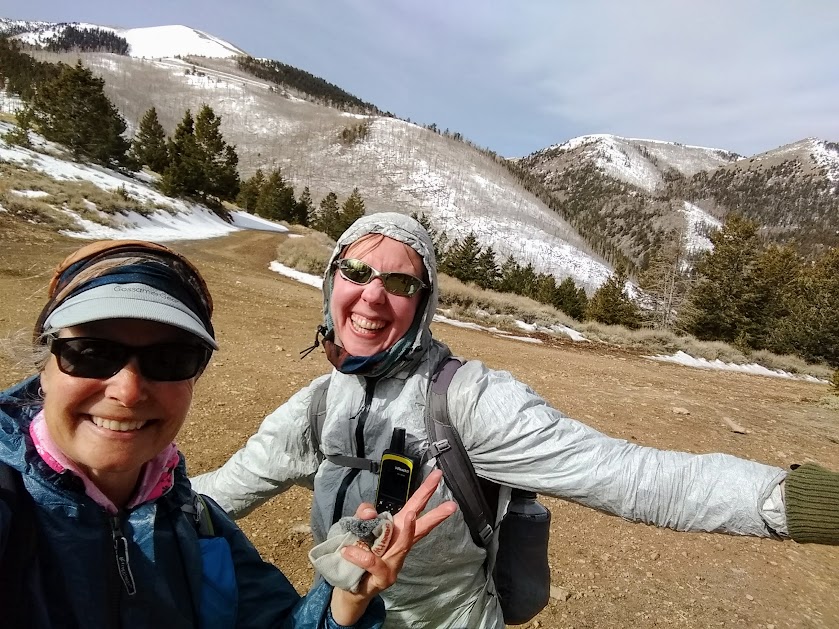