My attempt to spend a few days exploring the Badlands a couple of weeks earlier was somewhat thwarted by wind storms followed by a drop in temperatures and snow storm. However, my abbreviated first visit gave me plenty of motivation for a return (link to related post). With no home for the night after departing Chaco Culture National Historical Park, I headed to Bisti in hopes of catching sunset colors. 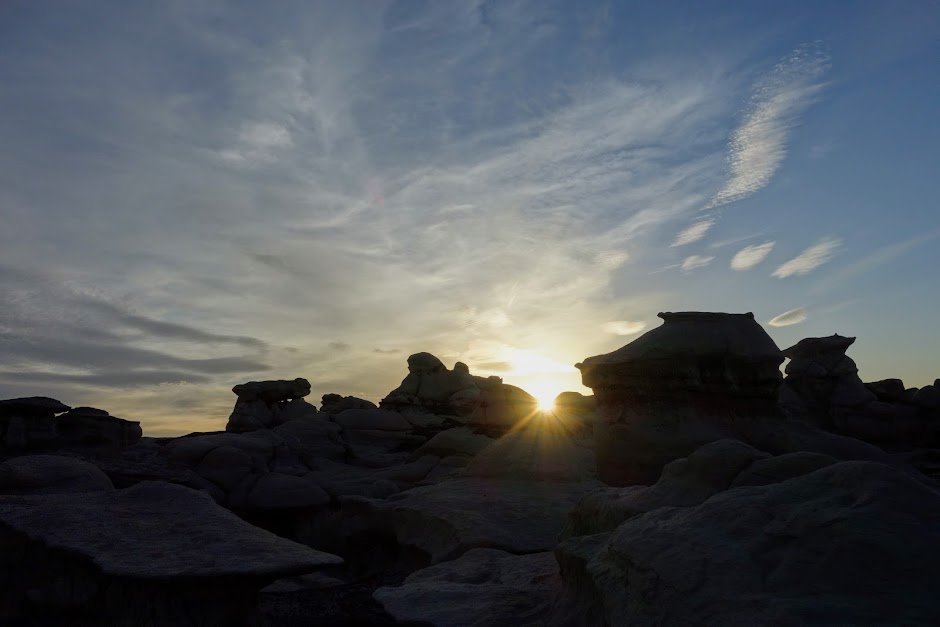 It wasn’t WOW but I was grateful to experience without gusty wind and blowing sand. 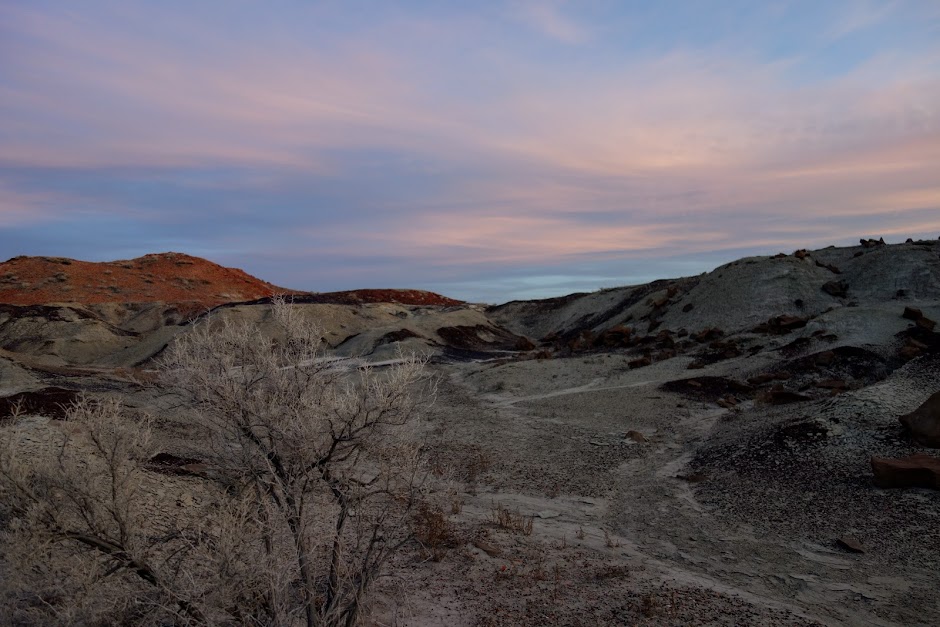 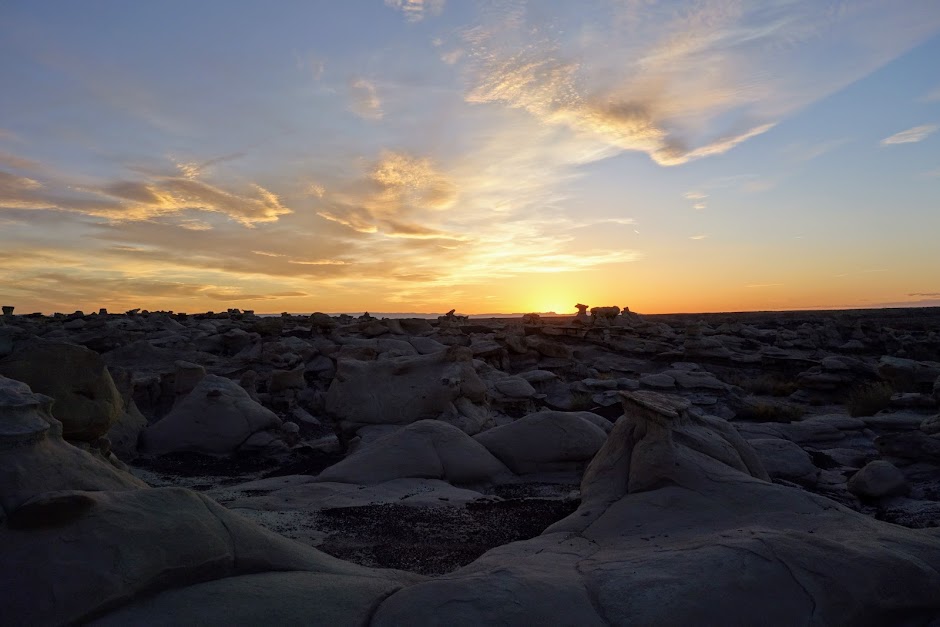 The next morning I headed out early hoping to catch the golden hour of light. A little surprise caught my attention instead. 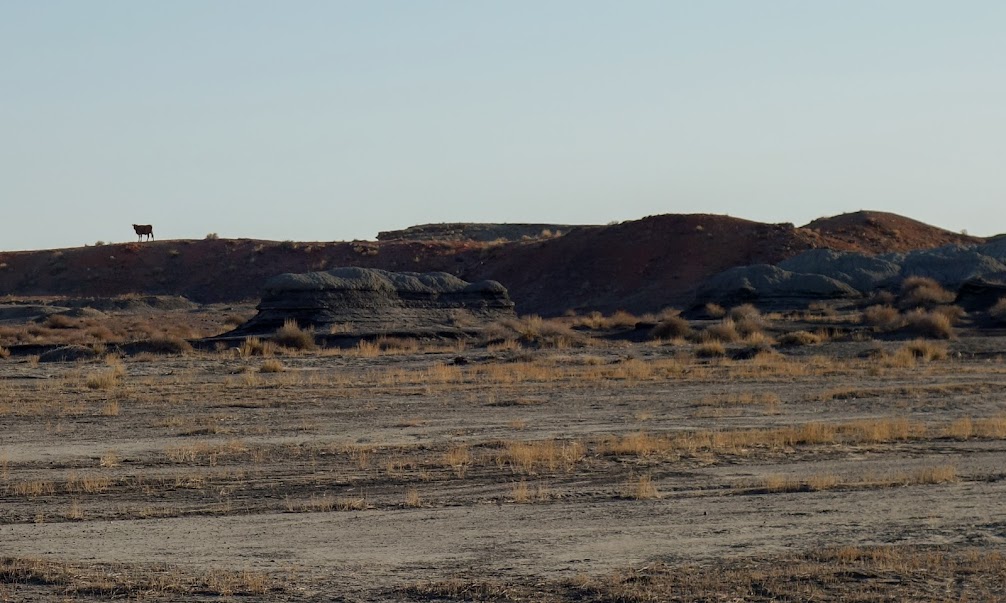 YEP a cow. What the heck? This is a protected area with gates and fences. Imagine my disappointment when I saw this cow followed by bike tracks. What a bummer. 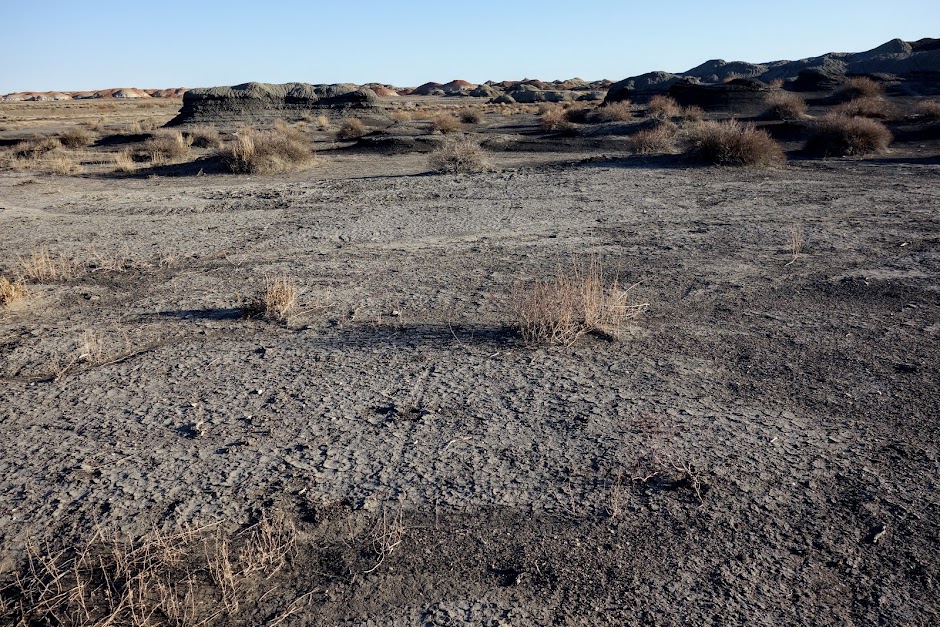 While the lighting ended up being far less than ideal I was thrilled to find large pieces of petrified wood. 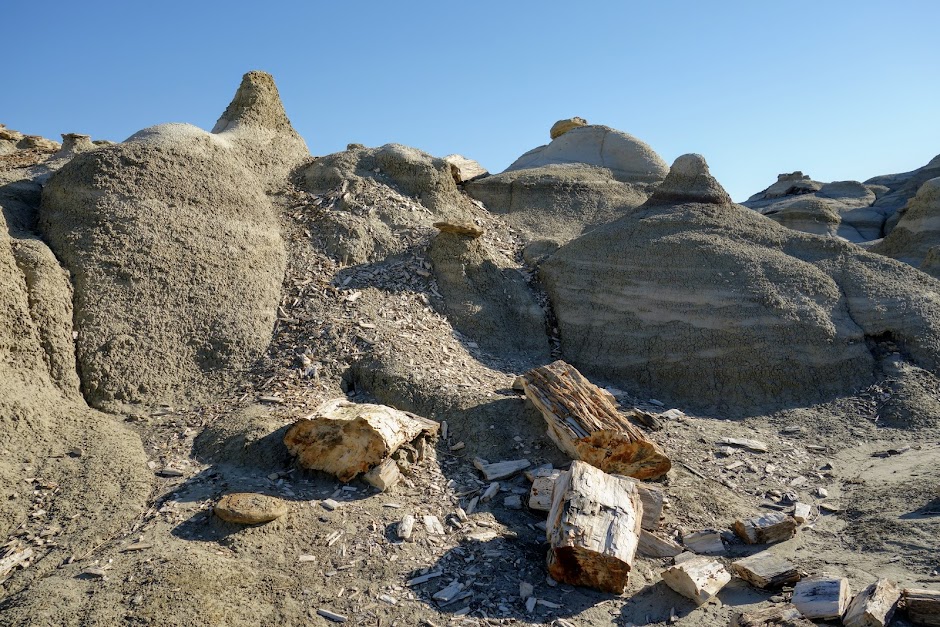 Yes, that once was a tree! 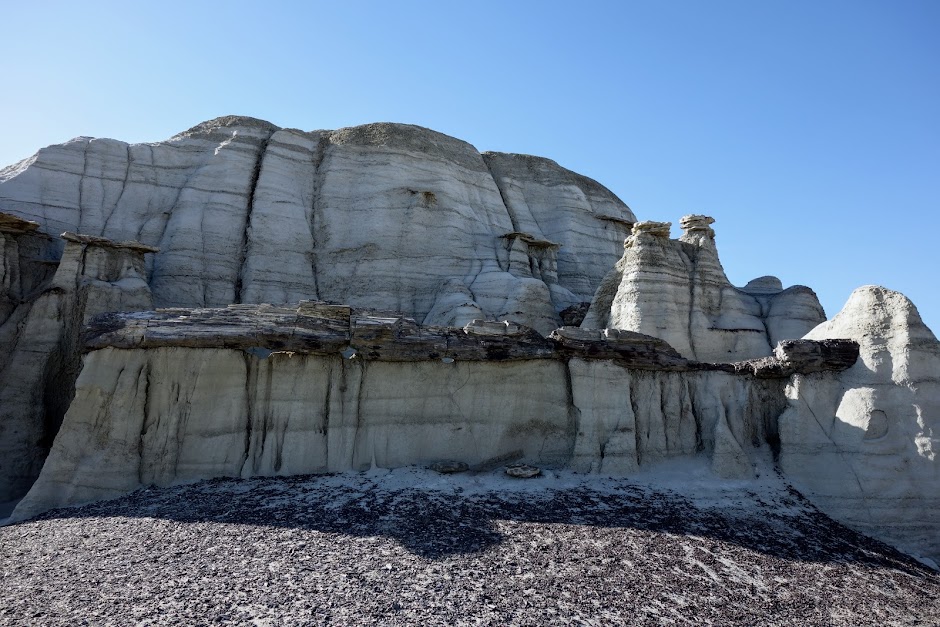 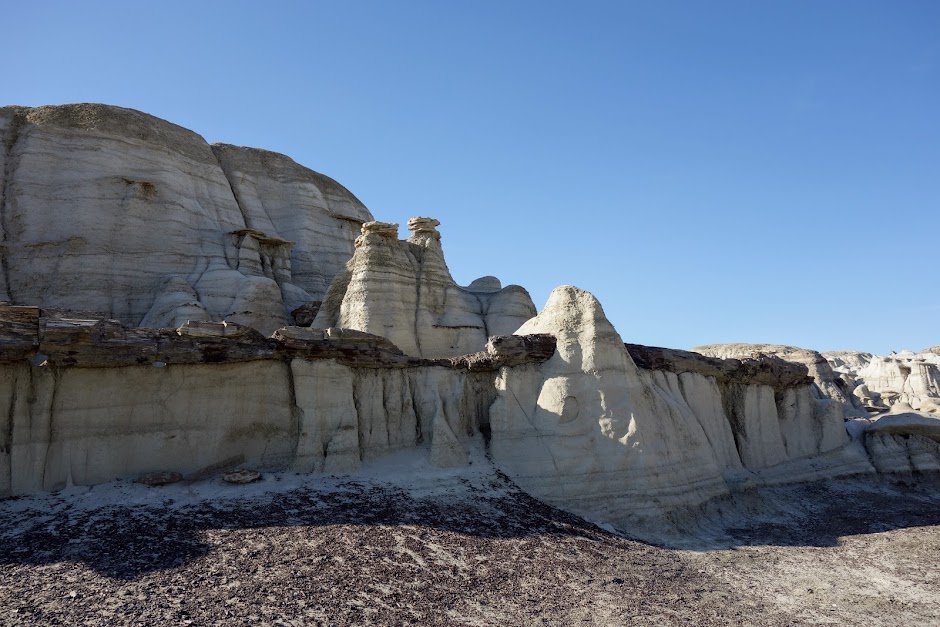 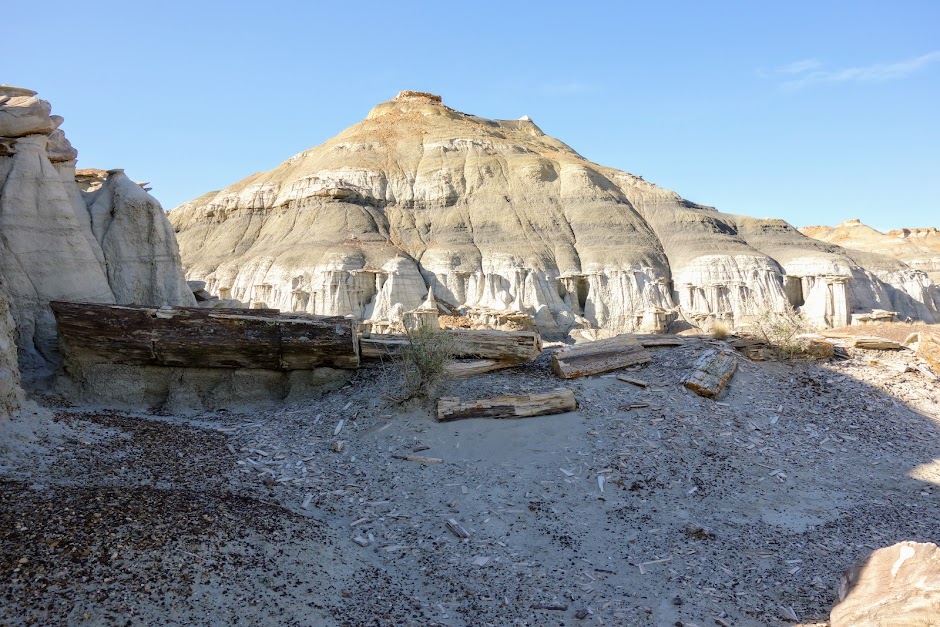 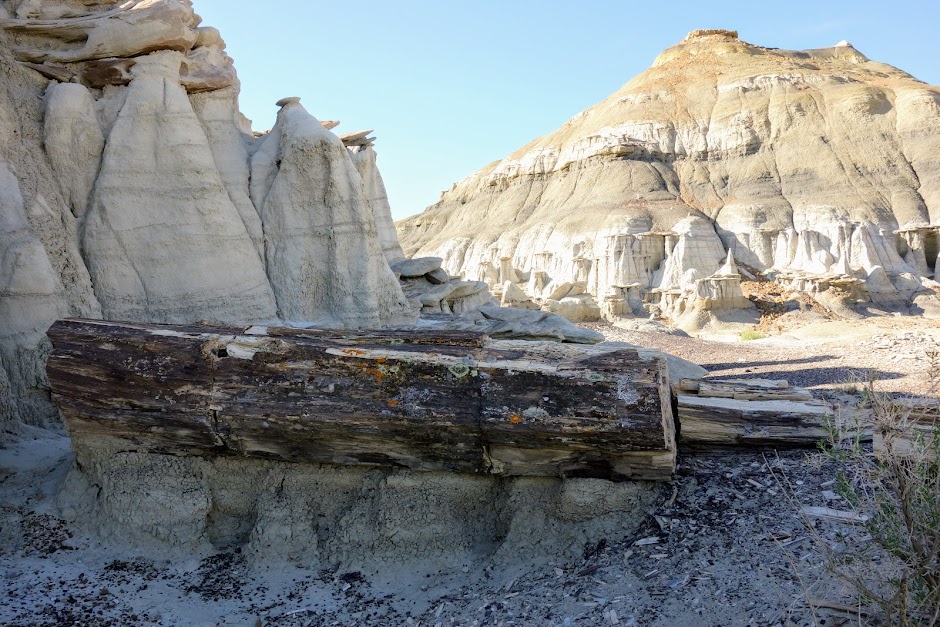 One of the cool things you can find in the area if you keep your eyes peeled are giant bird nests; I found three on this day. There’s a shelf on the tallest formation housing one. Second photo is zoomed. 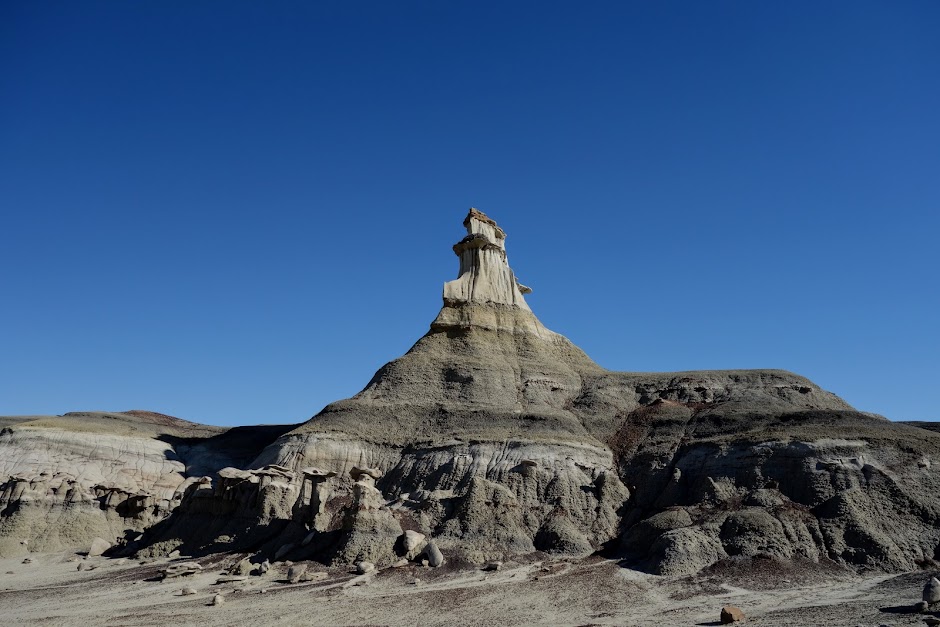 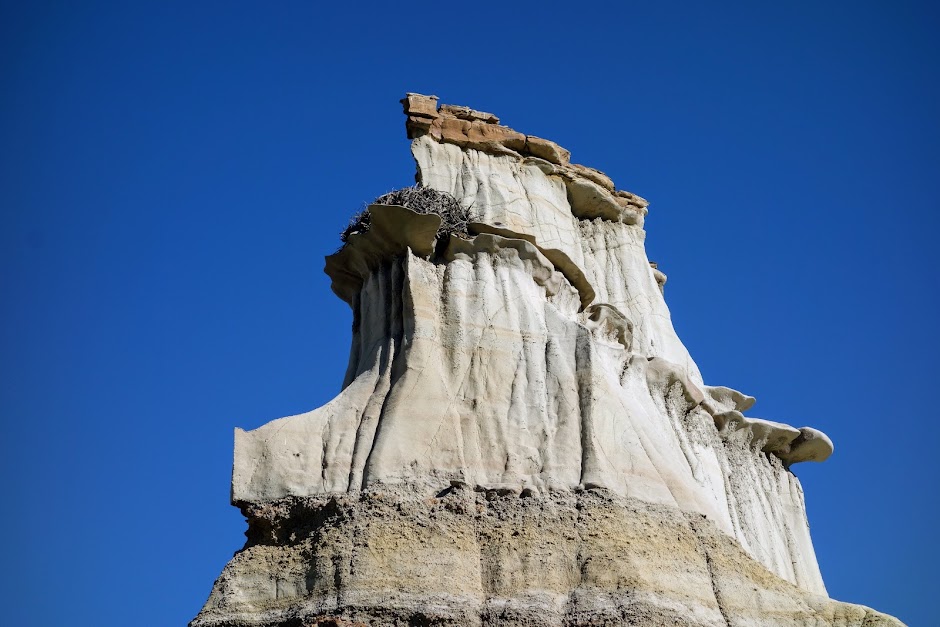 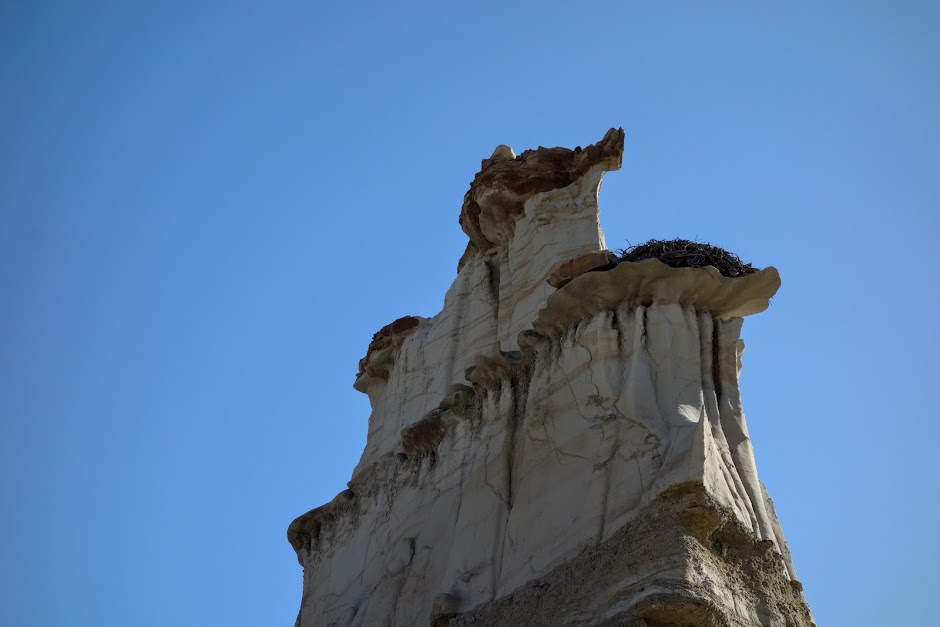 Can you see the nest off to the right? It appears to have been abandoned and is slowly returning to nature. 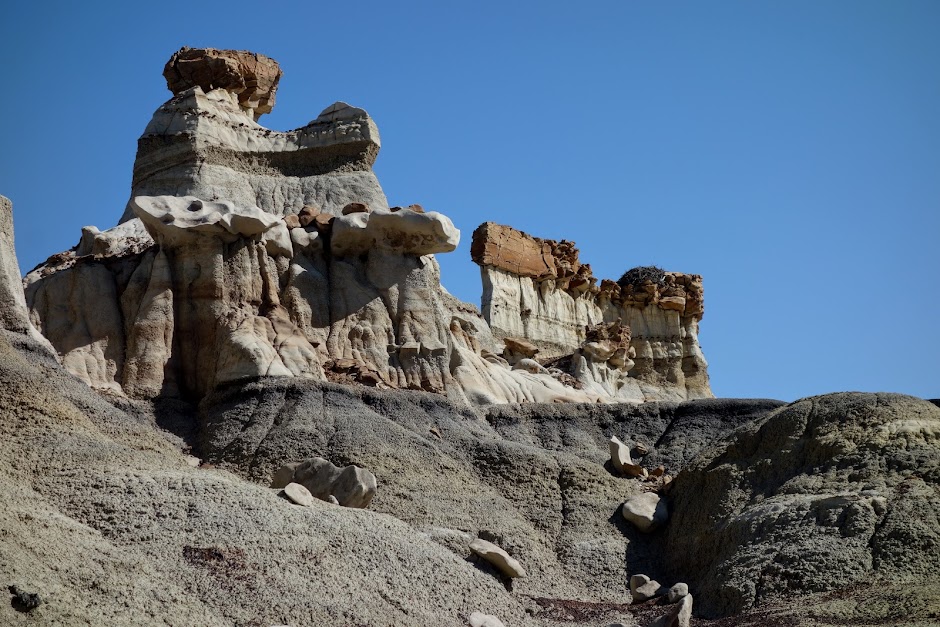 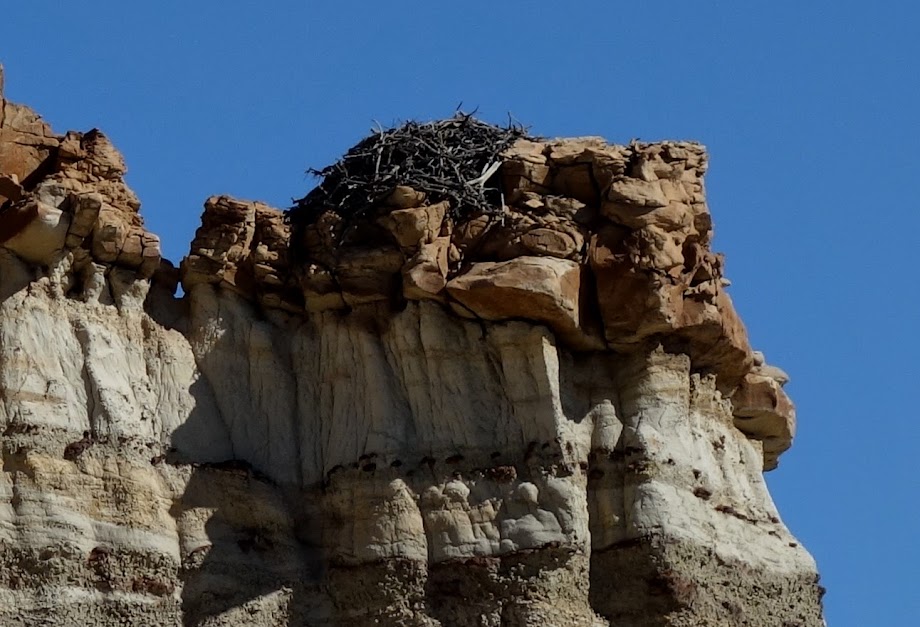 Lots of cool features and acreage to wander. There aren’t any trails thus best LNT practice is to limit steps to water channels, hardpan and sandy areas. Plan to turn around frequently when channels run out. In general I found the area in surprisingly good shape. 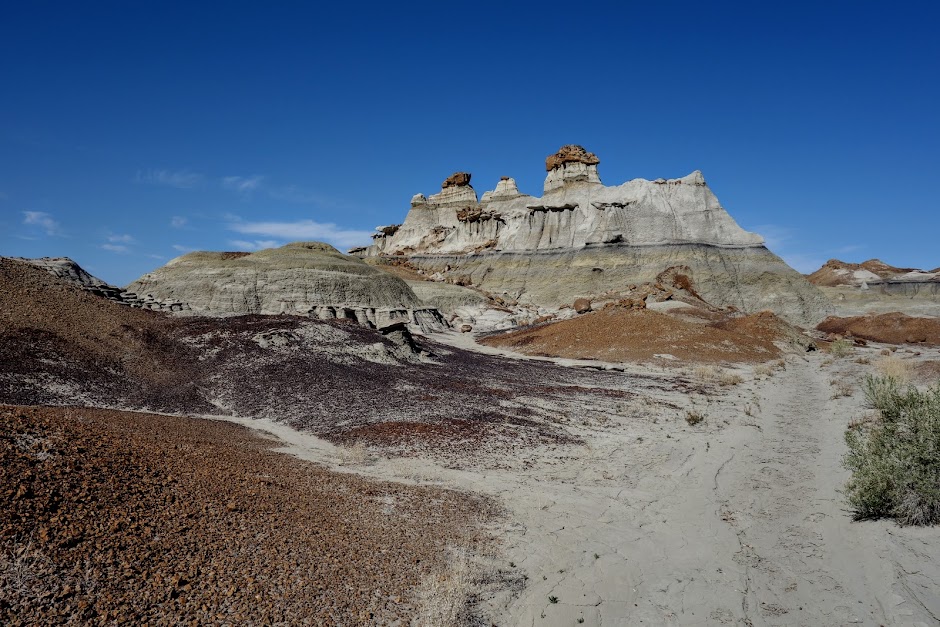 On my Gaia app the dashed line represents a suggested trail. The red is my wanderings. I strongly recommend using a compass and GPS or app if you are navigationally challenged like me. It’s really easy to get turned around as the sandstone features make you feel as though you are in a mini mountain range. You can see the times I turned around when I ran out of LNT options. The thin red line was from my first outing (link to related post). 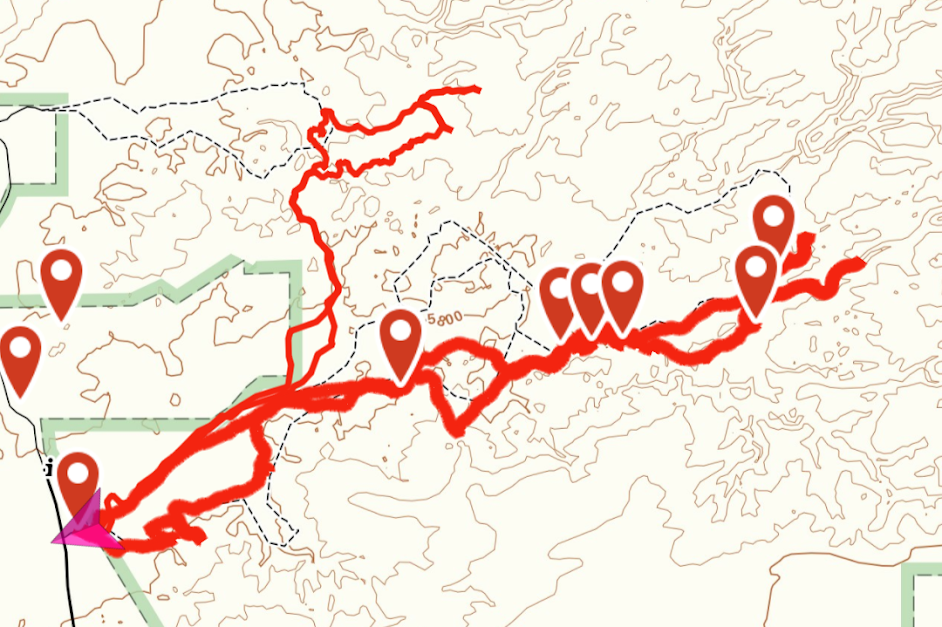 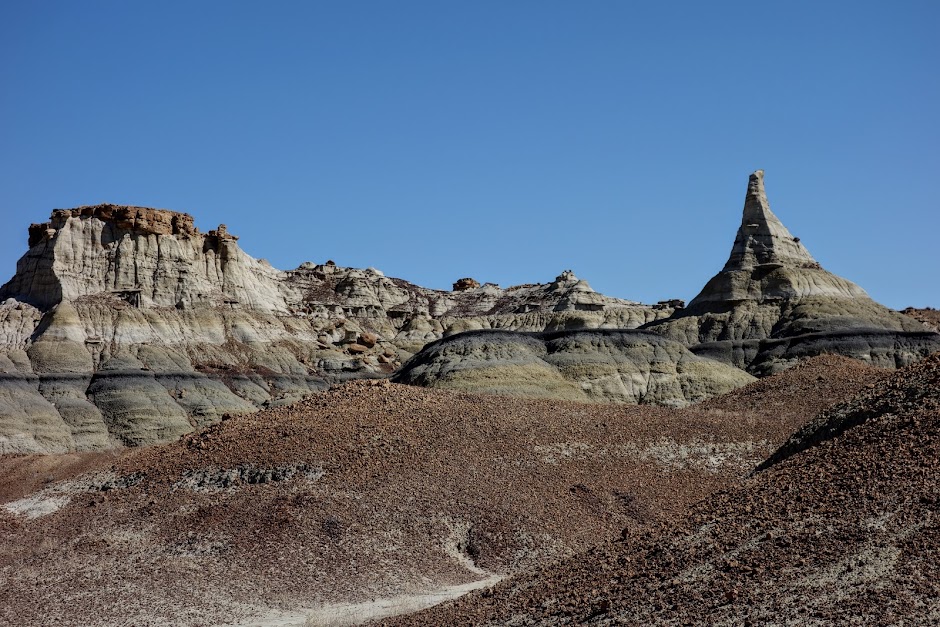 THE balanced rock at Arches National Park has nothing on this one. 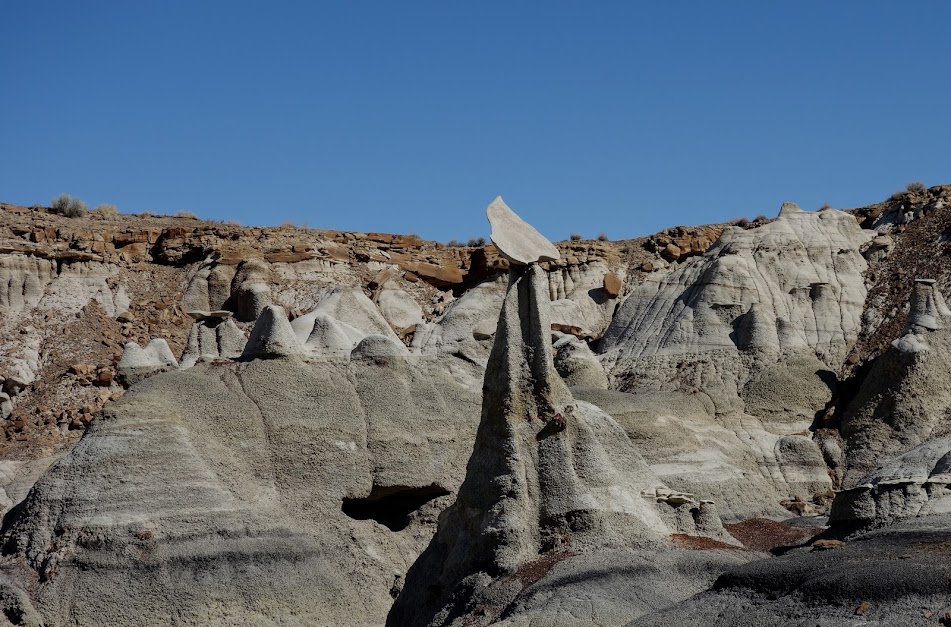 At the trailhead, BLM provided an overview map which shows some named features such as this one called cracked eggs. 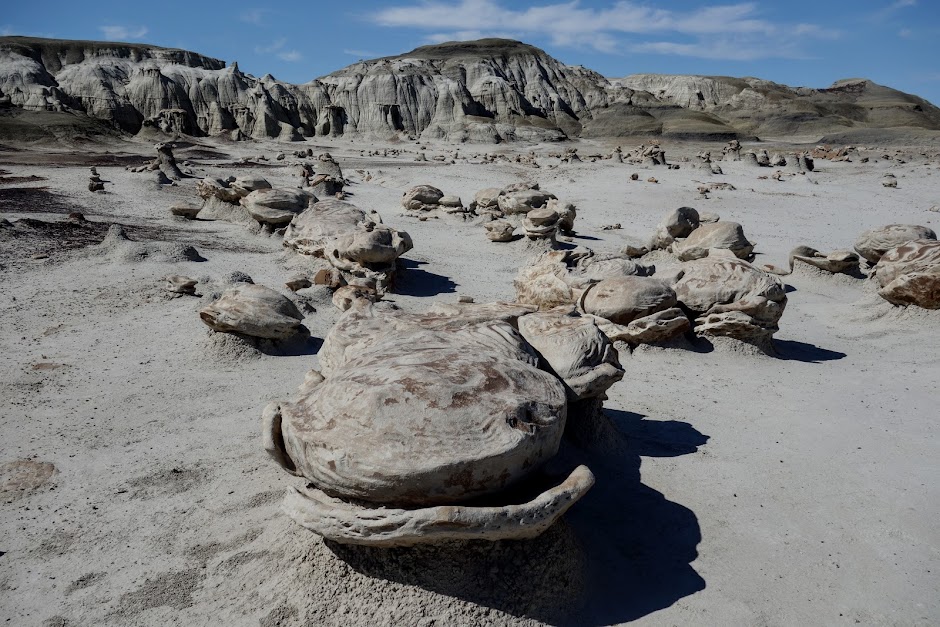 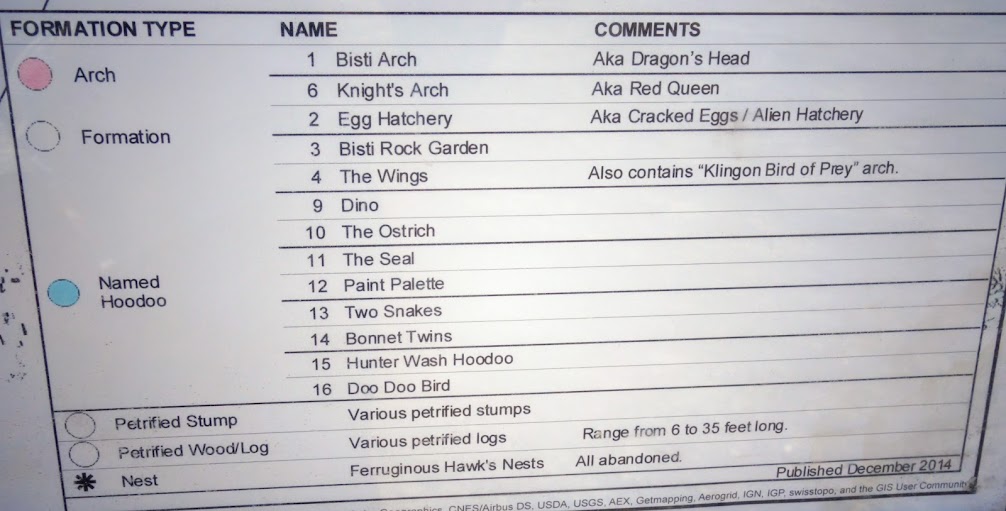 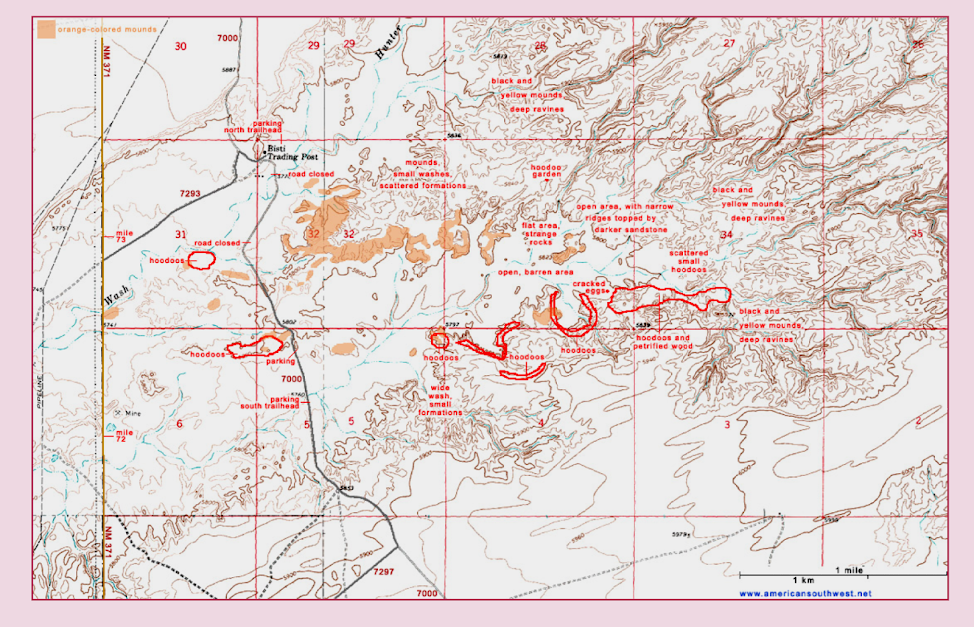 Remember the first photo of the cow? Sadly I found this incredible damage. Who let the cows in? So much for LNT. 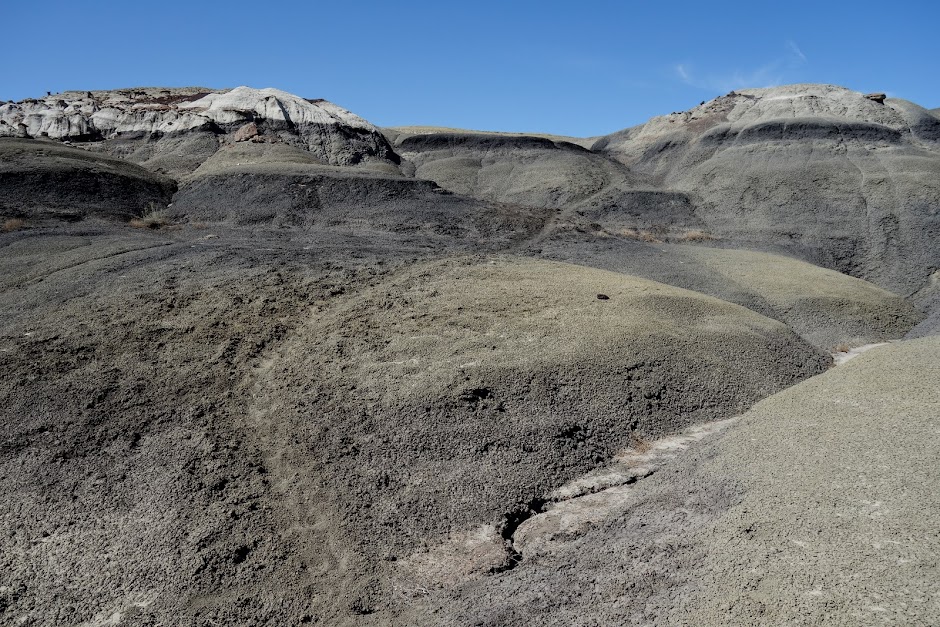 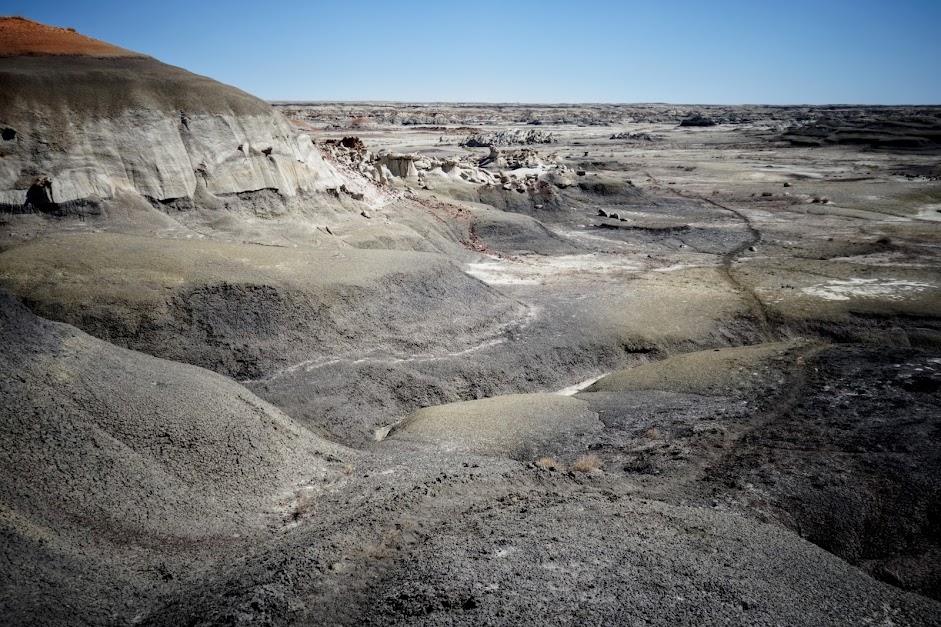 This gate was closed each time I visited but with plenty of fence around perimeter I’m sure opportunity exists. I didn’t notice any cows in the area surrounding the wilderness. 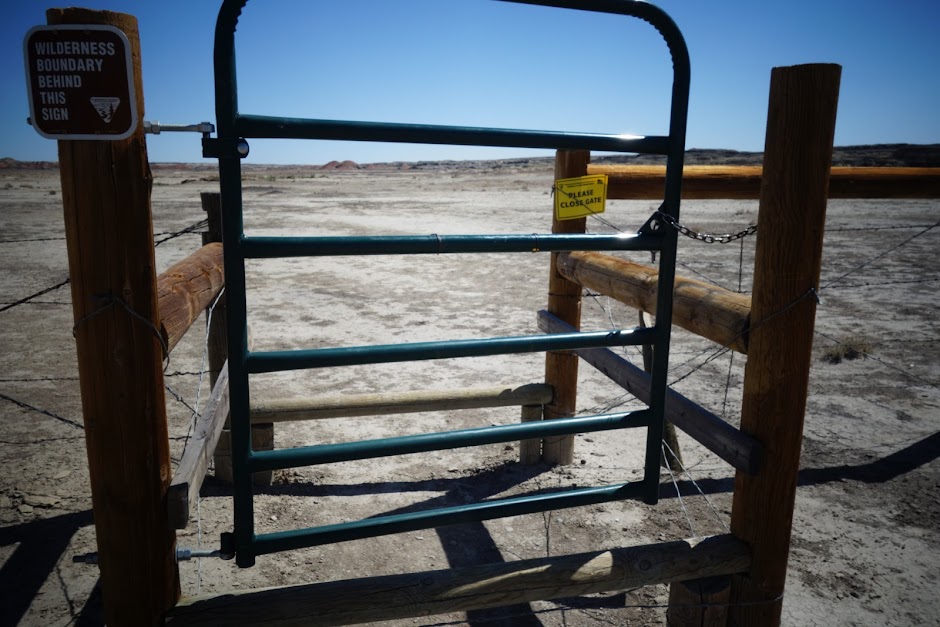 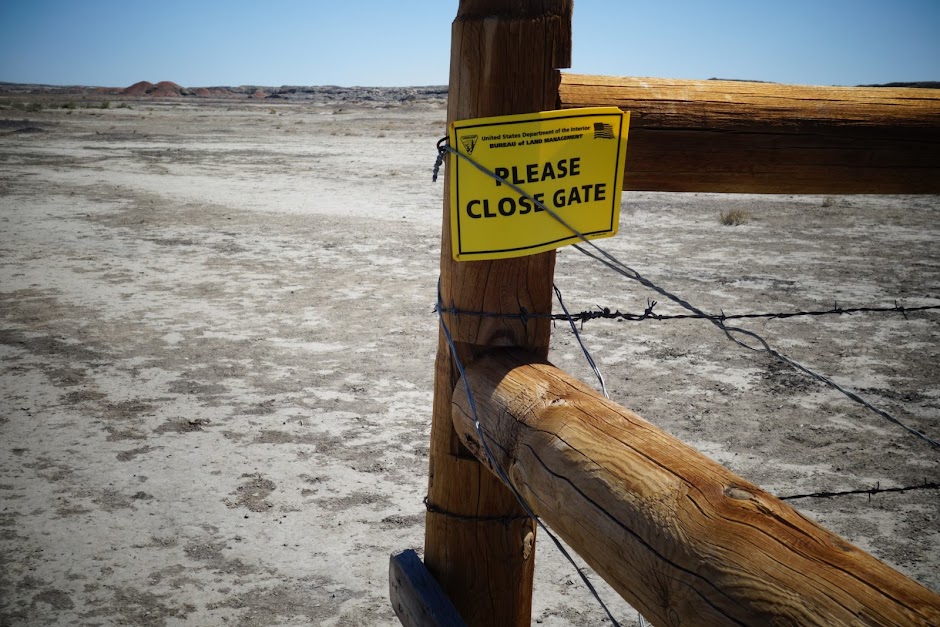 Maybe the sign should have included warning about non-aggressive cows. 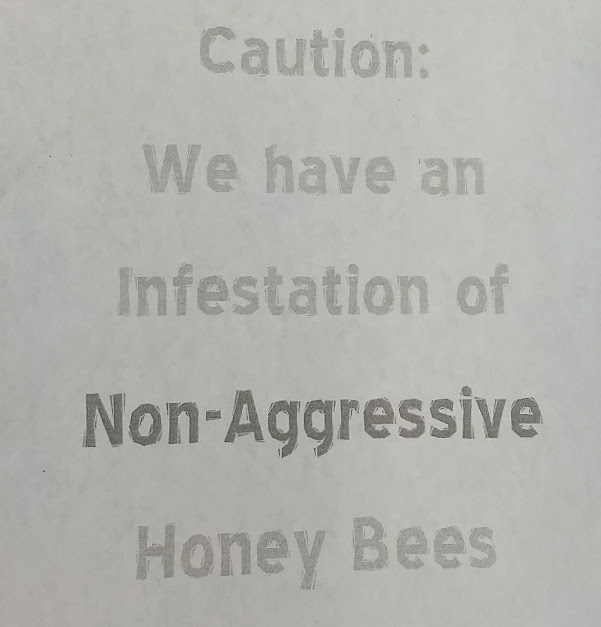 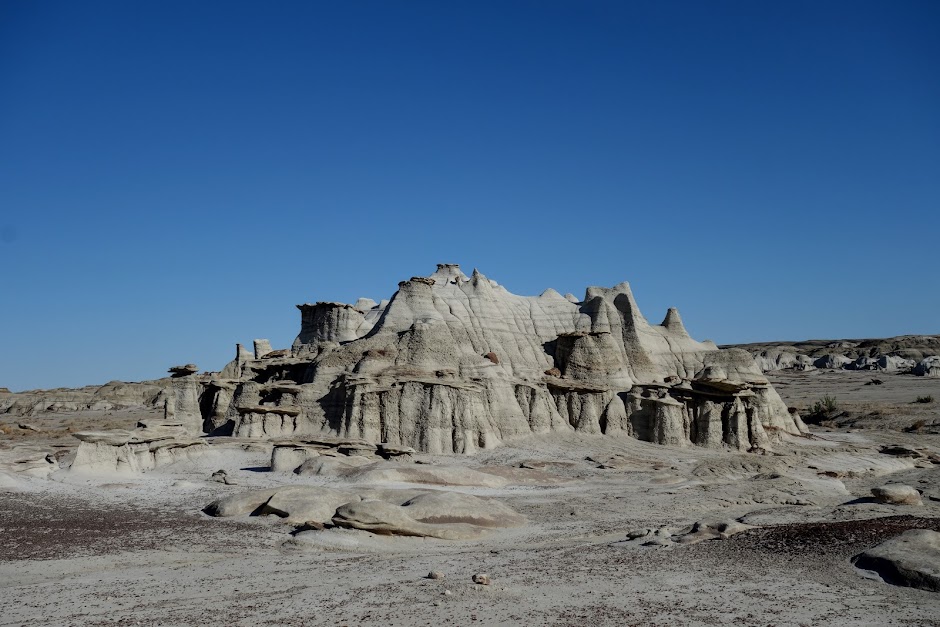