Upon leaving the Moab area, I was undecided on direction of travel. Should I go east toward Grand Junction or west toward Green River? It was late in the day and I noticed dispersed camping options on BLM land in Sego Canyon. I’d picked up a brochure at some point and knew the area had some rock art. Sounded like a good place to delay my decision for the night. 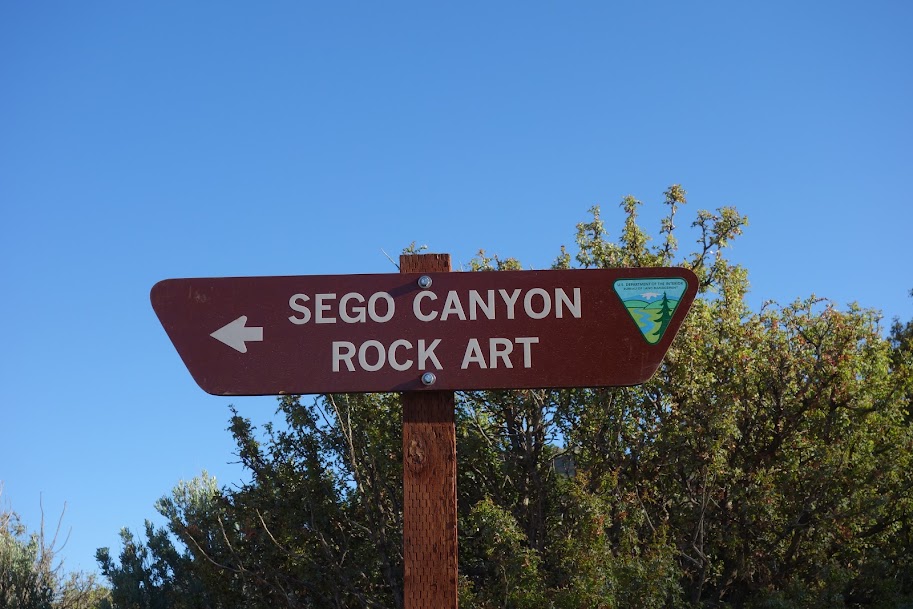 BLM has provided a parking area with a restroom and walking trails for exploring the rock art. 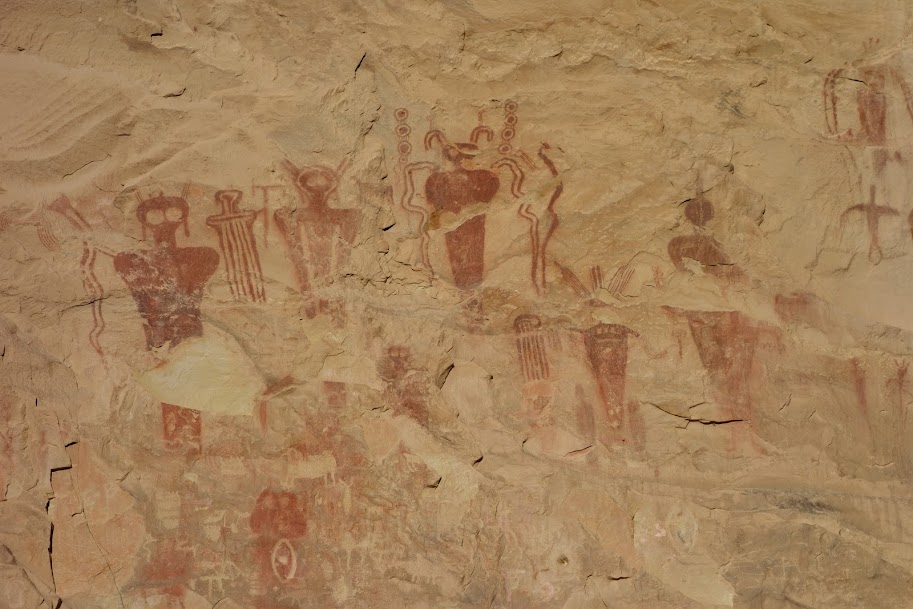 The interpretive signage could use updating. They have been the subject of weather and vandalism. 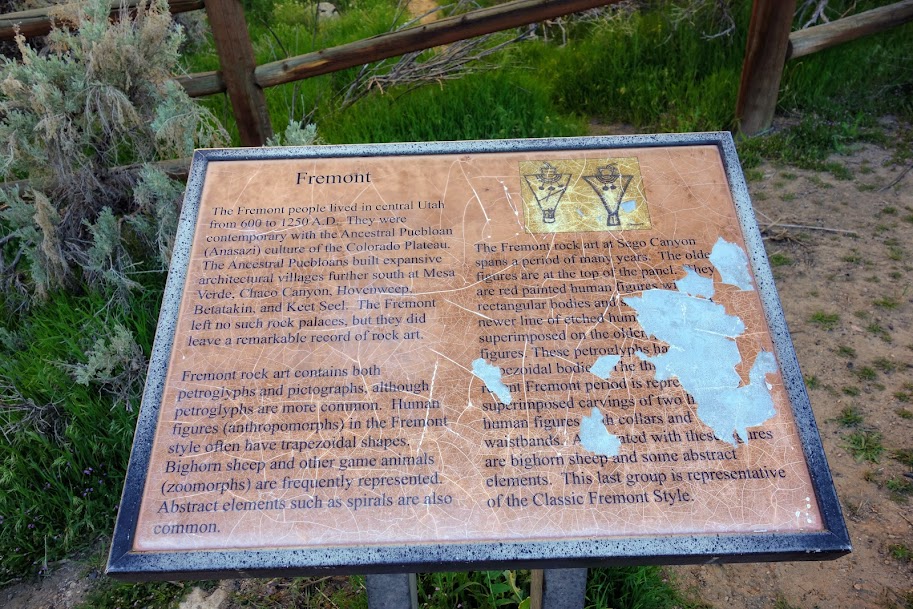 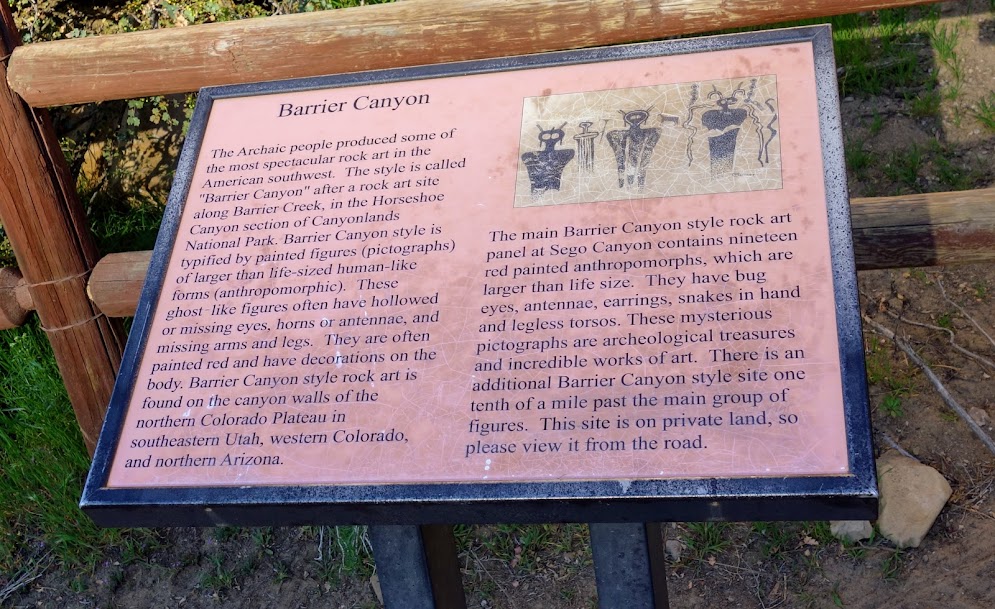 With the ease of access, there has been a fair amount of vandalism, including bullet holes and graffiti. 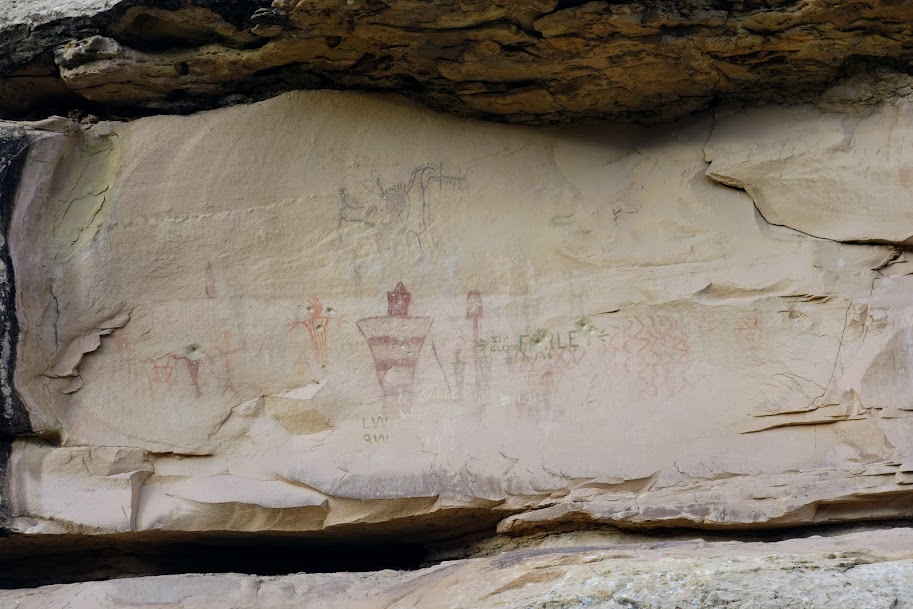 This panel begs the question when are signatures considered historic versus graffiti? 50 years and older seems to be the magic answer. 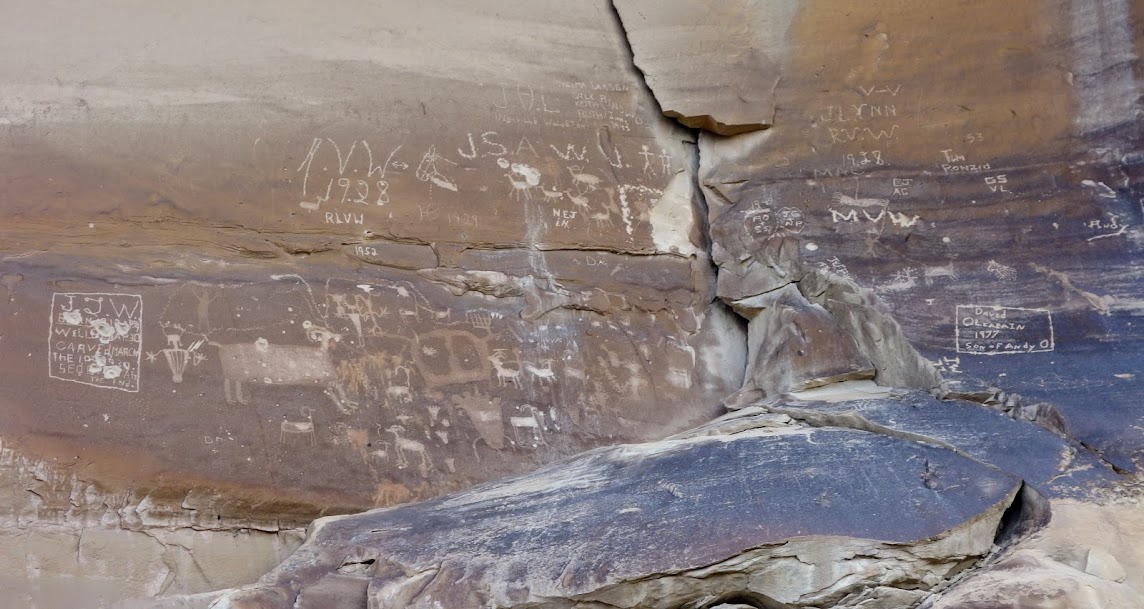 Cool to think of the those who spent time in these canyons. 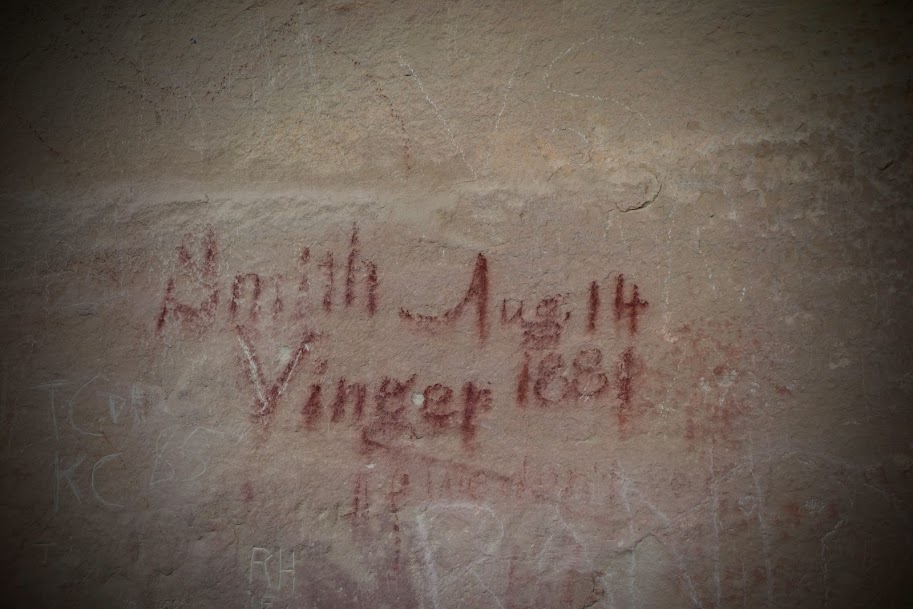 This panel shows the variety of style. 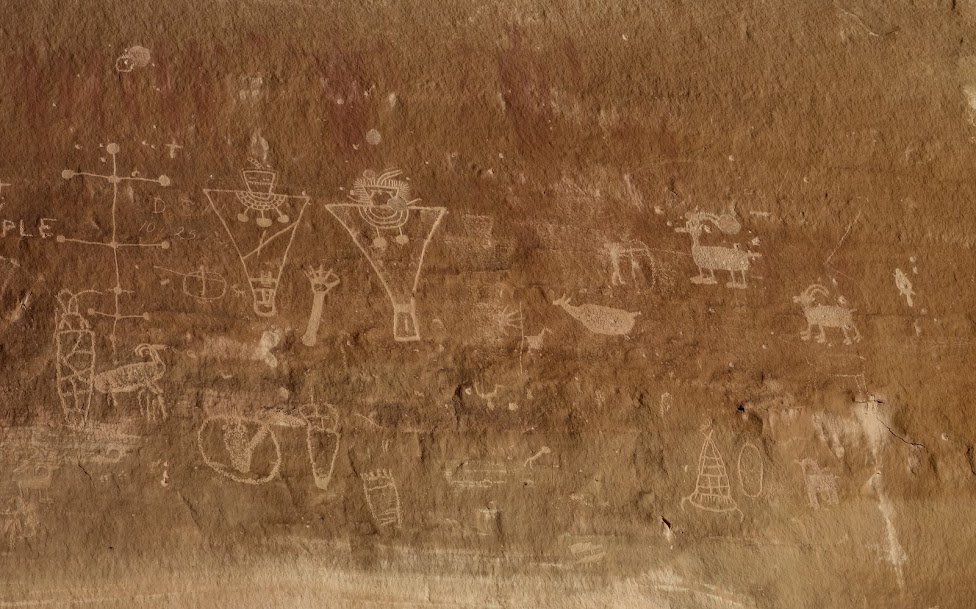 I spent a few hours driving the road through the canyon looking for mining relics and evidence of the coal mining town of Sego. The company store was built to last. According to Wikipedia, “Sego was inhabited about 1910–1955.” 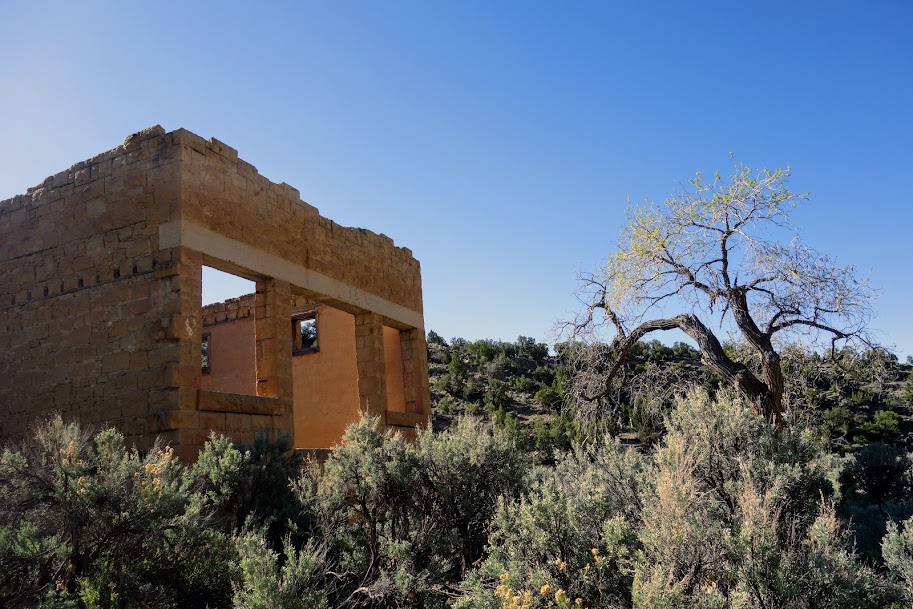 Rock lasts; wood not so much. Interesting to see how quickly structures can fail when abandoned to weather. In less than 50-100 years . . . hard to imagine after looking at the ancient puebloan structures still standing thousands of years later. 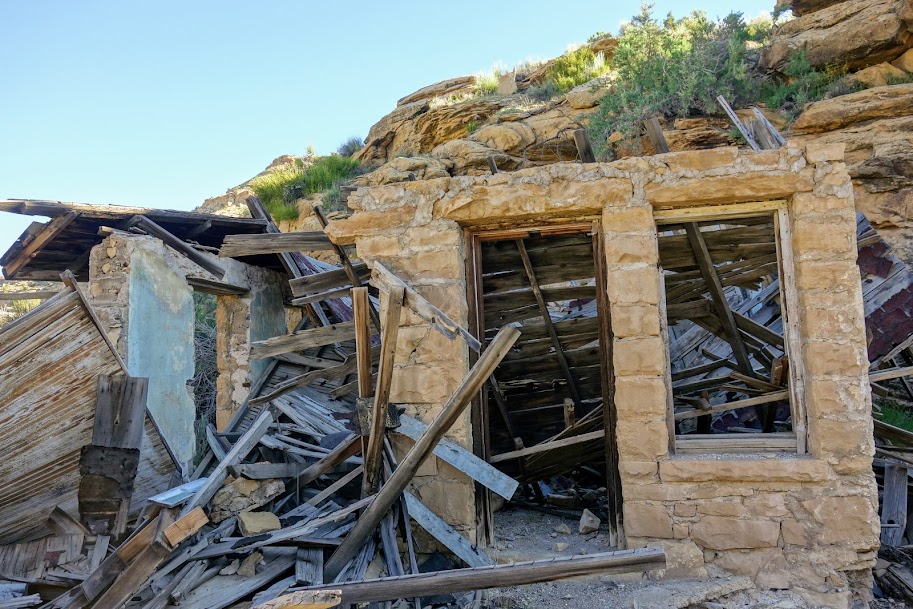 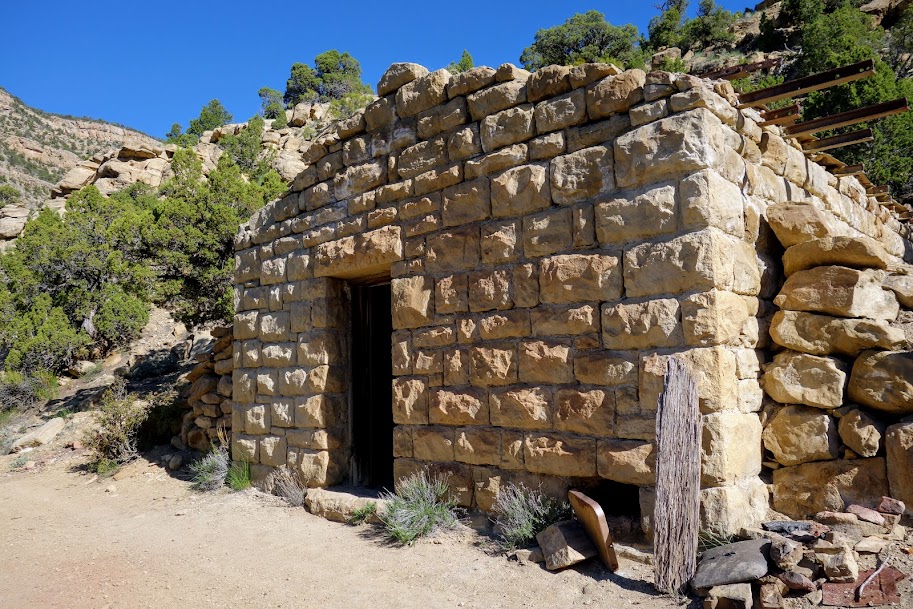 I like how you can see the roof line on this house. 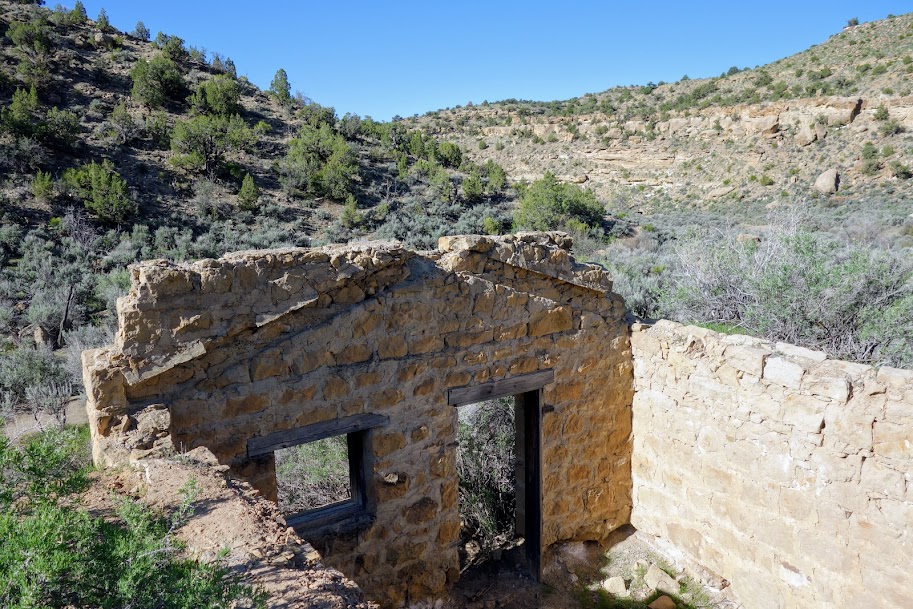 Sometimes you have to leave behind your car and refrigerator. 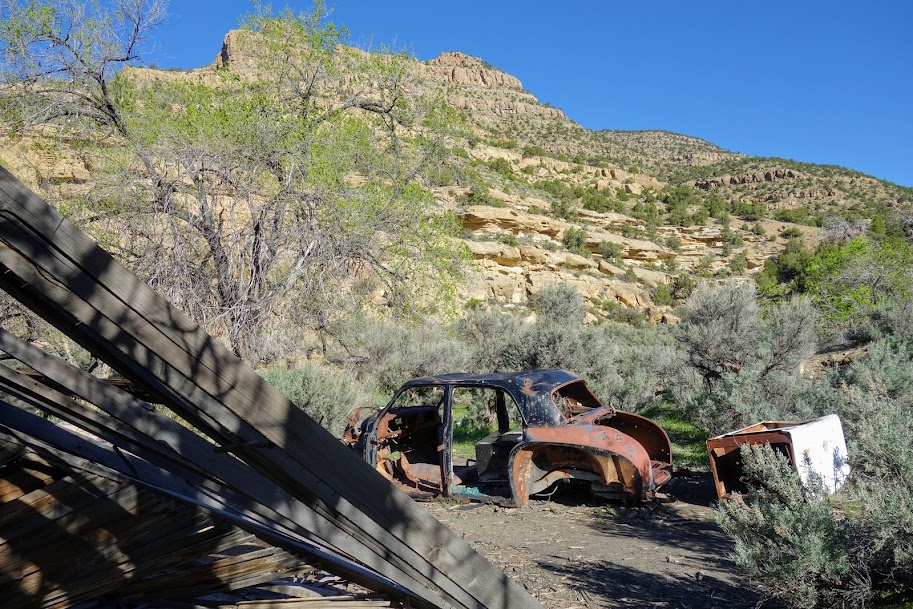 I found this marker at one of the sites. 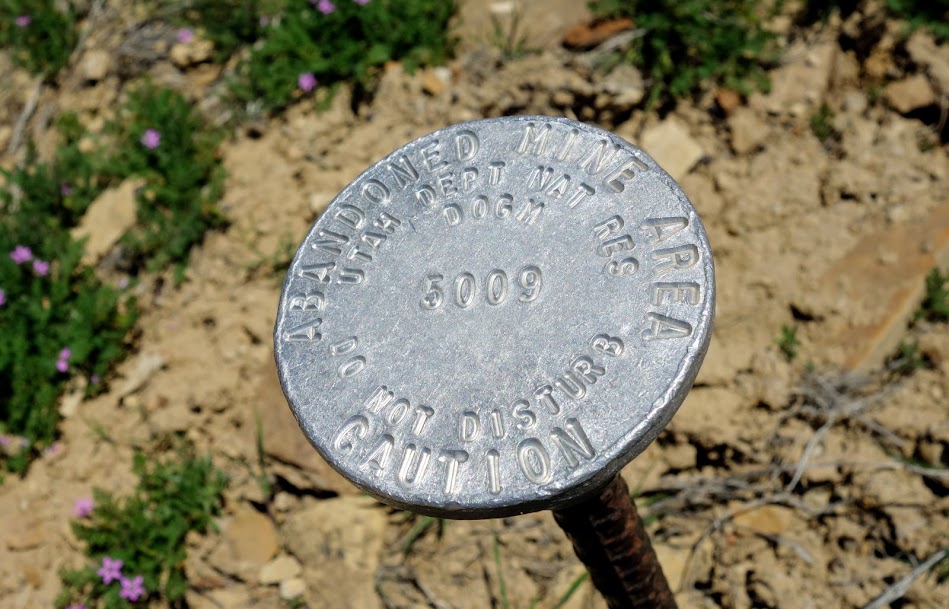 Some structures are easier to spot along the road, others take a bit of exploration by foot. Wander the side trails/roads, some might only lead to campsites but mostly they’ll lead to history. 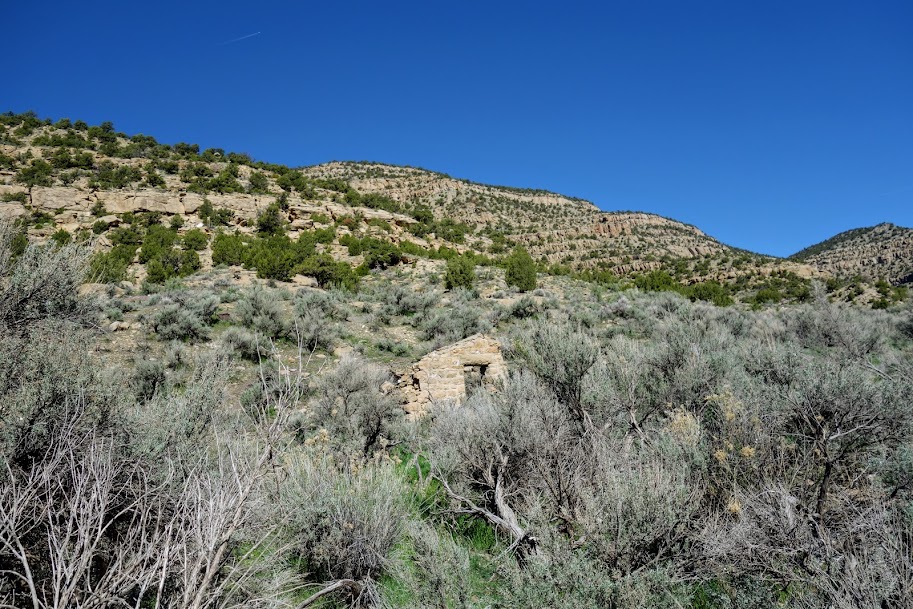 I’m guessing this was an old shaft. 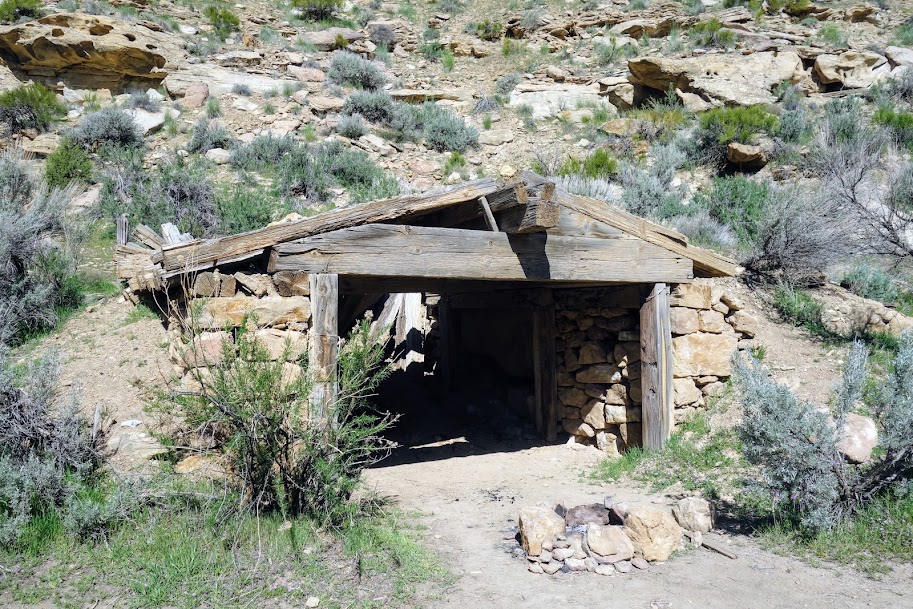 There is also a cemetery welcoming a wander. It was interesting to see graves that were from the mining days, but others from more recent times. 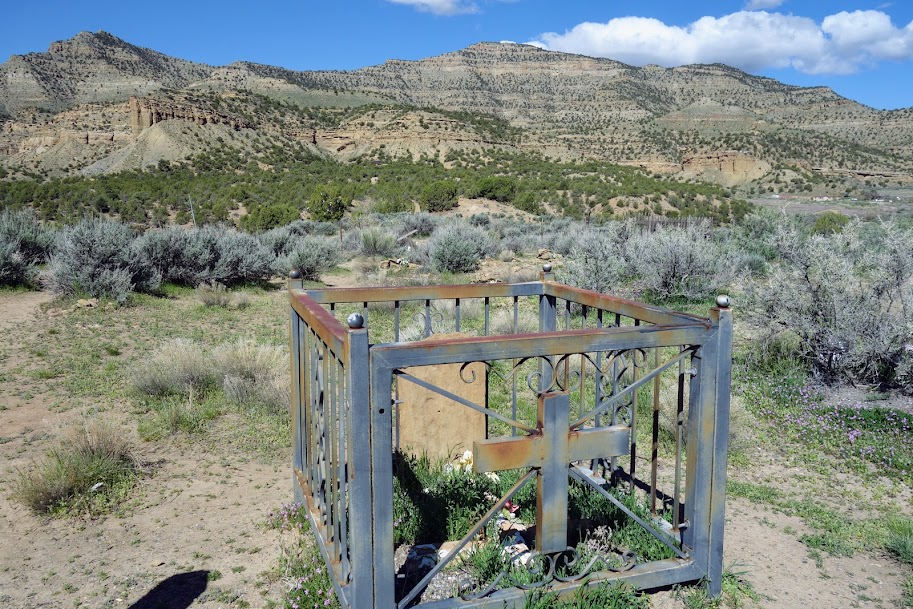 Many of the grave markers had offerings like coins or trinkets. This decorated tree was nearby. 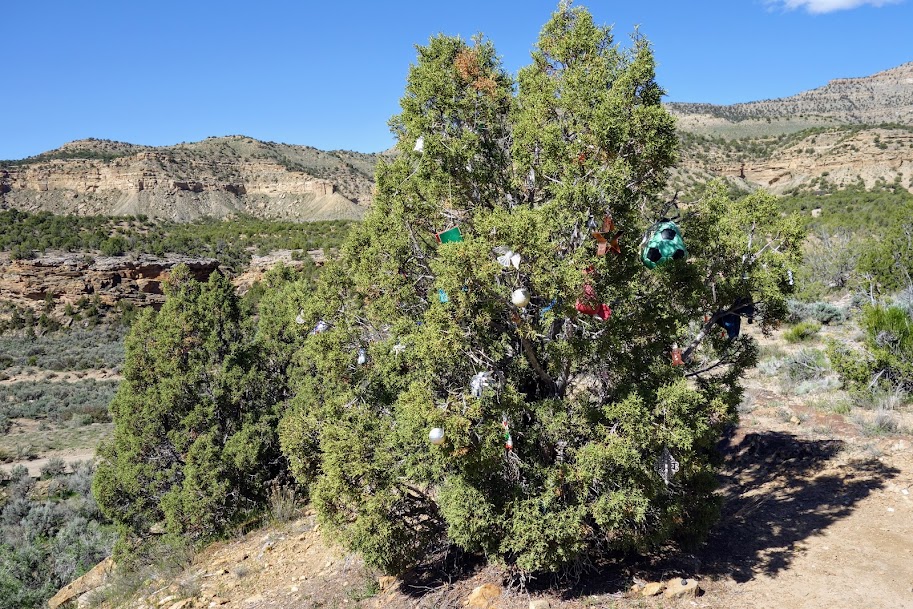 A fair amount of infrastructure was built for transporting coal once upon a time. I saw many cement bridge abutments, now missing the bridge. There were also a few wood structures remaining. 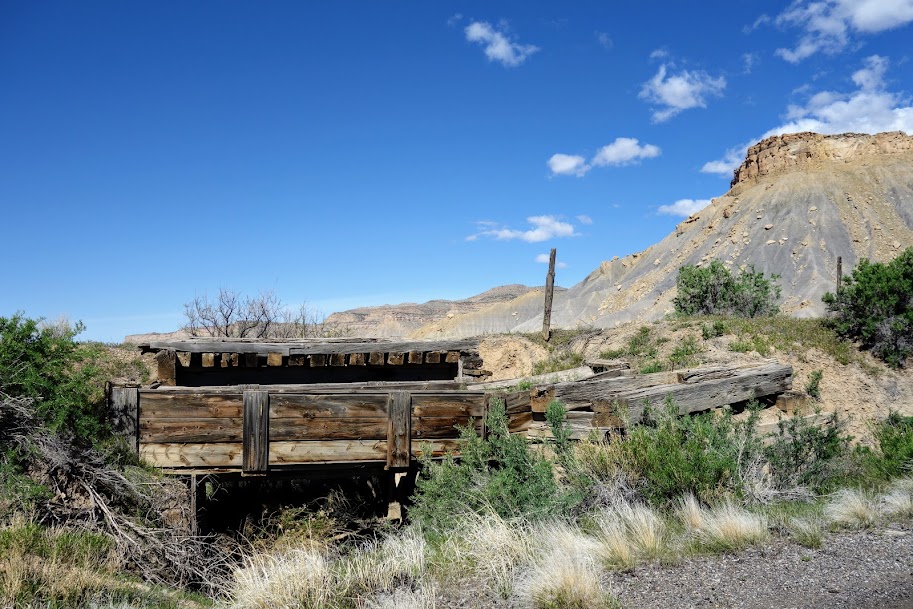 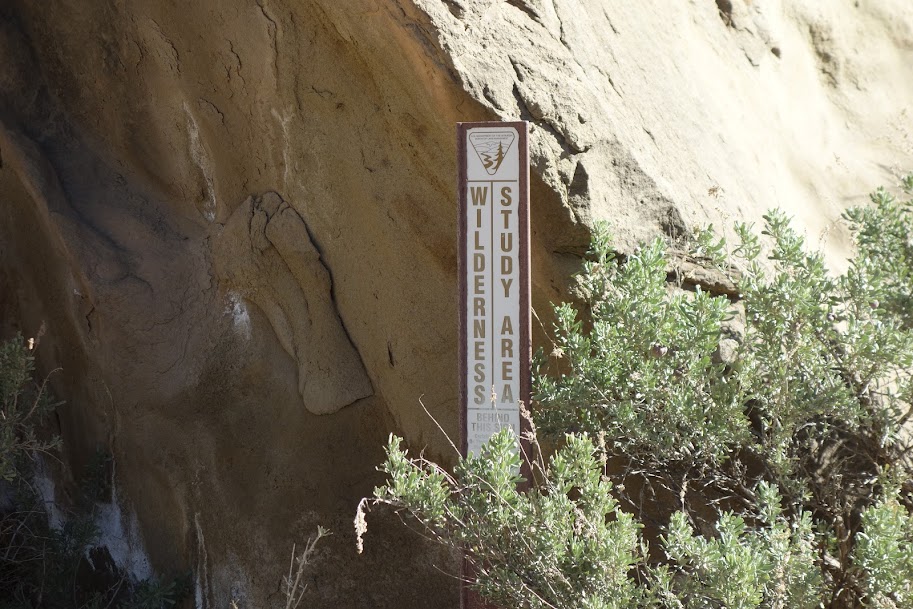 Is any trip complete without finding blooms? 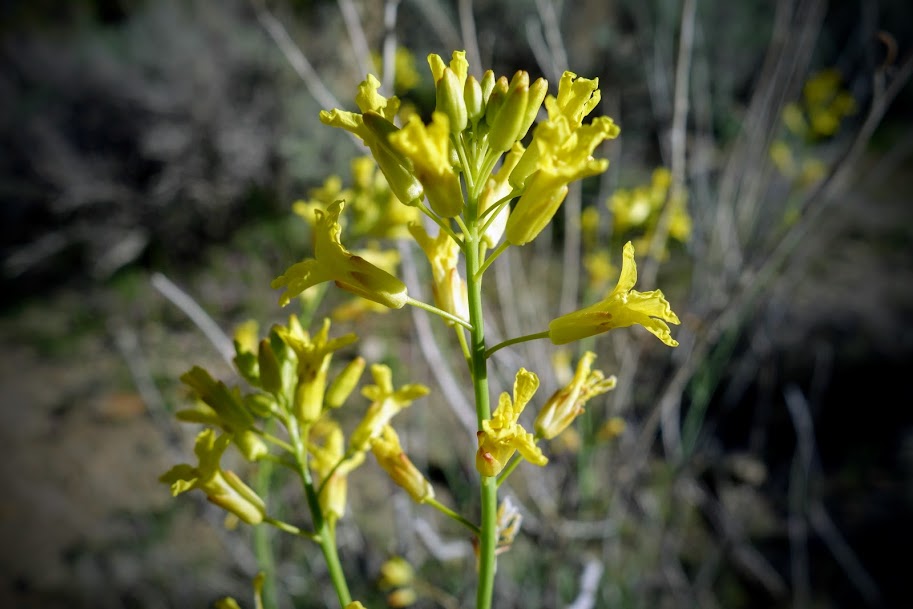 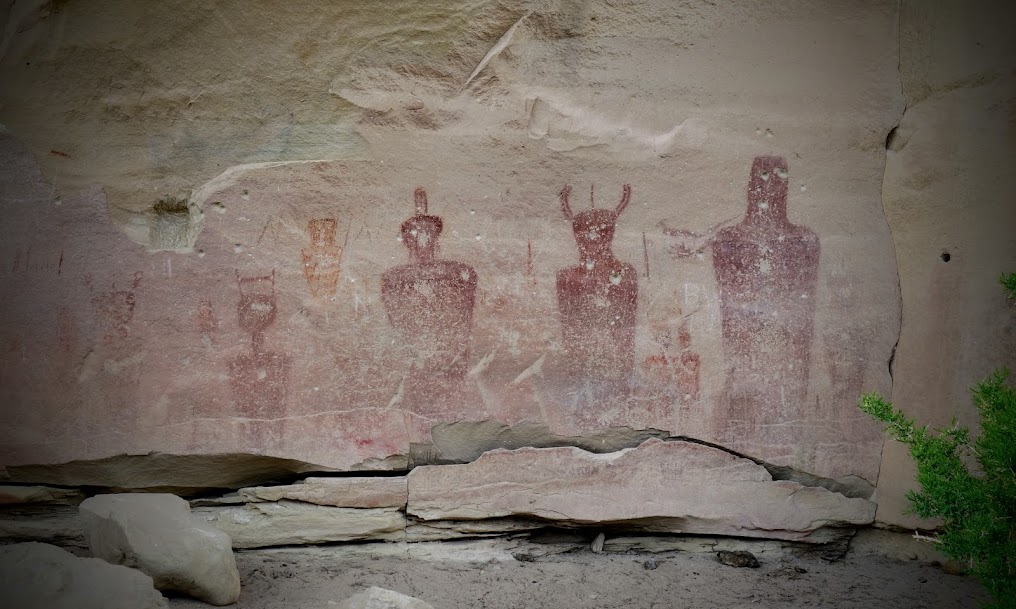